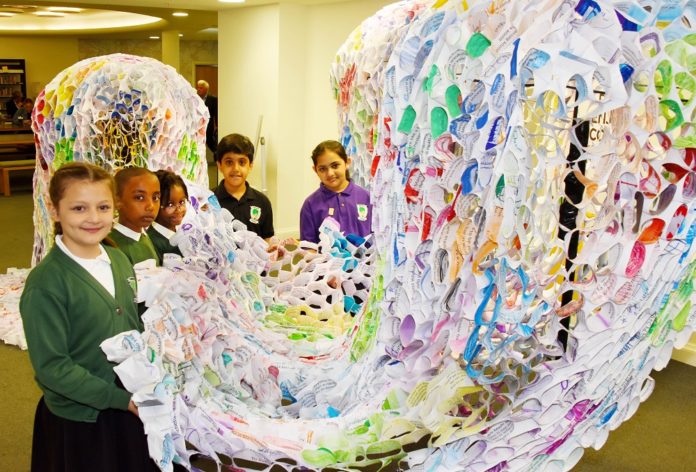 The forthcoming Manchester Poetry Library will host a ‘living poem’ that could eventually be written in every language spoken in the city.

Local poet Zahid Hussain, who has worked closely with the Manchester Writing School, played a leading part in the Made in Manchester project to create a multilingual poem that celebrates the city’s cultural diversity.

Schoolchildren and community groups were asked to add lines to Hussain’s poem in their own heritage language. Contributions were made in 64 languages, with the finished poem now on display in Manchester Central Library alongside an English translation.

The Made in Manchester poem will move to the new Manchester Poetry Library at Manchester Metropolitan University, opening in spring 2020, where it will continue to grow to reflect Manchester’s 200 community languages.

The Manchester Poetry Library will be the first of its kind in the region, and just the fourth in the country, with a focus on widening access to poetry and building on the  University writing school’s existing strengths in translation and working collaboratively with Manchester’s diverse communities.

Martin Kratz, Poetry Projects Manager at Manchester Metropolitan, said: “The Made in Manchester poem is a huge achievement – an enormous feat of editorship, translation, organisation, collaboration and creativity.

“The Manchester Poetry Library at Manchester Metropolitan is proud to be part of the poem’s continued journey. This is a living poem: not only are there many more lines to add to the current poem, the number of languages in Manchester keeps growing too. The poem directly reflects the values that have informed the Poetry Library’s ambition to collect poetry in all of Manchester’s community languages.”

The idea for the poem originated from a conversation between Hussain, who founded Manchester Muslim Writers, the first collective of writers of Muslim origin in the UK; and Councillor Luthfur Rahman, Executive Member for Skills, Culture and Leisure for Manchester City Council.

They wanted to find a way of demonstrating just show diverse and yet how united the city and its different communities are, using the power of words and language.

Hussain said: “The response to the Made in Manchester poem has been quite amazing.

“Manchester Poetry Library will be the perfect home for it. What Manchester Writing School does really well is the grassroots projects and partnerships that connect ordinary Mancunians with the University.”

Councillor Rahman said: “The poem is a fantastic achievement – written largely by young people to celebrate the many different languages spoken in Manchester. It’s very moving to see and to read and demonstrates perfectly the strong sense of belonging, identity, and shared community spirit that is found throughout the city.

“We actually think it’s a record-breaker in terms of the number of languages in one poem and are getting in touch with the Guinness Book of World Records to see if they can confirm this. Even if they say it isn’t, we’re very clear that this is a local first and is definitely a record-breaker for Manchester.”

Garden shed proves a lifeline for war veterans in Salford