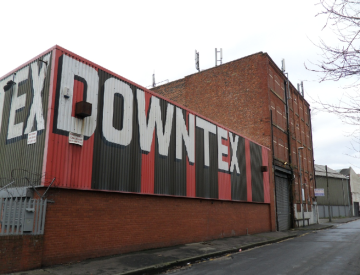 A former mill in the centre of Manchester is planning to be converted to creative arts and performance space and a night club.

Downtex Mill on Mary Street in the Strangeways area of North Manchester has been vacant for many years having previously been the site of a textile mill and more recently a furniture storage warehouse.

Now planning permission is to go before the council this Thursday with the intention of providing a creative canvas and space for up and coming artists and musicians as well as a community hub for the local and student population.

The applicants hope it will enhance Manchester’s already thriving art and creative cultures industry and assist in the regeneration of the site and surrounding area. The scheme is therefore proposing daytime and night time uses with a multi-use creative space during the day and a nightclub during the evening.

According to the application:

The creative uses would take place on the 2nd to 4th floors of the building and would include creative workshops, facilities for fashion designers, photographers and artists, dance studio space, exhibition space and music rehearsal space. The applicant also plans to works with local colleges and universities to provide adaptable space and facilities for leaning classes. The nightclub area would be located within the basement and first floor and would also utilise the external rear courtyard as this would be used as a smoking area for users of the nightclub. The applicant has stated that the creative users of the daytime space would also be able to hold events in the nightclub space in the evening if they so desired.

A similar plan by the same party was submitted in 2014 but this was withdrawn because the applicant was advised that there was insufficient information to justify the proposal. However, the report notes that a significant amount of work has been undertaken since then.

Through The Keyhole: Next Generation Vita Student Living revealed for Circle Square