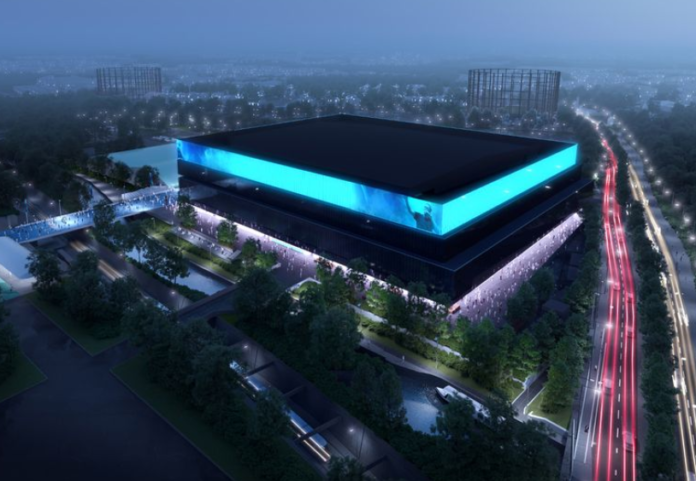 Plans for a new concert Arena next to Manchester City’s Etihad Stadium have been recommended for approval by Manchester Council planners.

The 23,500 all-seater arena would be able to host around 120 major events a year.The new venue would play host to concerts, sporting events and conferences.The designs include room for 10,000 standing spectators as well as flexible seating.

It would create around 10,000 jobs during construction and at least another 1,000 once the venue is up and running.

The 4.46 hectare site is currently being used as a 500 space overspill car park for events at the Etihad stadium

During the public consoltation over 7,000 properties were canvassed by the council.68 replied supporting the scheme with comments such as

“This proposal is positive news for the events industry moving forward. The
events industry has been massively impacted upon over the last few months
and this would help the city emerge out of the recent crisis”

581 objections were received including

“The local area already suffers when football matches are played. The traffic
is terrible and the roads cannot cope. The arena would make this worse;
– There is noise, rowdiness, litter and people urinating on match days which is
unacceptable. The arena would be more intensive and could be ¾ of the
week that residents are going to suffer” and

“All credible evidence demonstrates that market growth will be far lower than
predictions, and consequently two large arenas of the same size and
configuration, serving the same catchment, will not be able to viably operate.
Manchester is already better served by entertainment venues compared to all
other markets throughout the UK, and a second arena at Eastlands will simply
take trade away from the city centre, conflicting with national and statutory
development plan policies.”

The Owners of the Manchester Arena have repeatedly expressed concerns that the city would not be able to support two venues in such close proximity.

However Graham Stringer MP  for Blackley and Broughton supports the scheme writing that Manchester’s long term interests would be served by this investment taking place in East Manchester. If this planning application is denied those that would benefit would be London and Birmingham.”

He added that It remains unclear the effects on Manchester, and the country, as a result of the Covid19 crisis but it is already evident that the city will be less affluent and people will lose their jobs and some businesses will close.

“The arena would could create 3350 jobs and 100 apprenticeships in construction
plus 100 new jobs when the arena is open. This would help alleviate this situation
and create many more jobs within the supply chain and services both during
construction and the operational phase.

The evidence suggests Manchester can support two arenas and there are no
examples of where an arena had to close simply because of competition. Indeed,
the Manchester Arena has announced much needed new investment.Manchester needs this investment more than ever and the project should get planning permission. ”

If permission goes ahead, the venue could be open by 2023