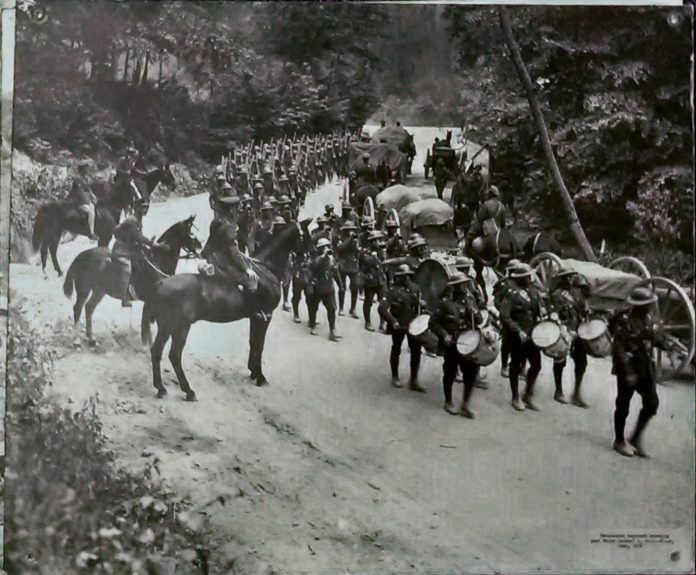 Plans have been announced for a unique cultural event to mark the centenary of the Battle of Manchester Hill – a battle that in one day took the lives of 79 men from the Manchester Regiment.

Using original footage and photographs from the time it will explore the impact of war on communities, and the heartbreak and loss felt, through the unique stories of individuals.

The event will take place at Manchester Cathedral in the evening of Friday 13 April and will be a contemporary performance telling the hidden story of the battle, the sacrifice made by those who fought and lost their lives there, and its significance in marking the beginning of the end of the First World War.

The Battle of Manchester Hill took place on March 21 1918 in an area of high ground just outside Saint-Quentin in northern France.  It is a little-known about battle that proved to be a forerunner to the last 100 days of the First World War.

The hill earned its name after being captured by the 2nd Battalion Manchester Regiment the previous year.  The Regiment continued to hold and defend their position until 21 March 1918 when the hill was attacked by the German army.

Despite a heroic defence by the 16th Battalion of the Regiment most of the battalion were dead or wounded by 4 pm that day.

Out of 8 officers and 160 men who went into action on the hill, just two officers and 15 other ranks returned to British lines.  Of the remainder, 79 men were killed and the rest either wounded and subsequently taken into captivity, or taken directly as Prisoners of War.   Among those who lost their lives was 29 year old Lieutenant-Colonel Elstob, who led his troops selflessly into battle with the words ‘Here we fight.  Here we die.’

The event will be ticketed, but free of charge.  More details, including full artist line-up and how to apply for tickets, will be announced soon.

Danny Moran: Does the council’s Planning Committee do rehearsals?