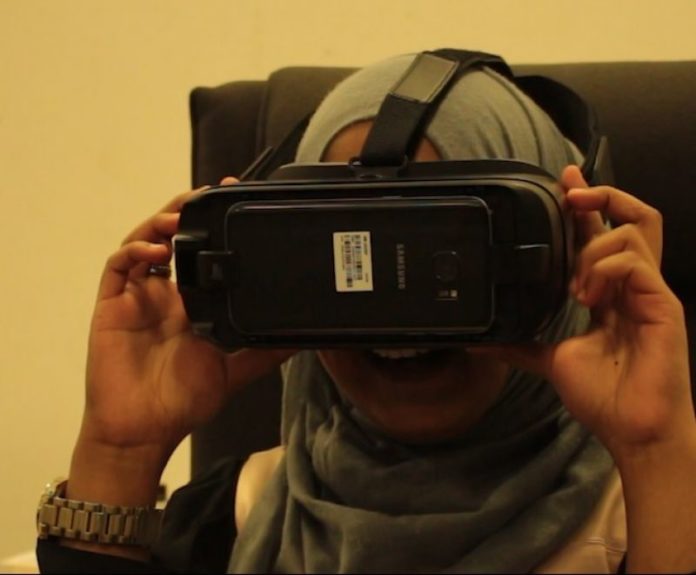 A PIONEERING project which helps children cope with traumatic court proceedings has been recognised for its exceptional contribution to the nation’s health and wellbeing.

University of Salford legal experts, working with the Manchester Civil Justice Centre, are using VR headsets with a specially created video to recreate the court experience. So far the technology has helped over 200 vulnerable children who are going through family court proceedings.
This project has today been named as one of the Nation’s Lifesavers – the top 100 university schemes that are making a life changing difference to our health and wellbeing. It has been named as part of Universities UK’s MadeAtUni campaign, which brings to life the impact of universities on everyday lives.
The Vulnerable Children, Virtual Reality and Courts project helps simplify the judicial process, makes the experience less intimidating and helps vulnerable children understand how decisions about their future are made. This has a significant impact on their mental health. Many have been neglected by their parents or have had some other family trauma.  The project plays a vital role in safeguarding the mental wellbeing of children going through these difficult court proceedings.
It is the first time VR has been used with courts in the UK and it has won the backing of legal professionals and the Judiciary.
Dr Shane Sullivan, Head of Law at the University of Salford Business School, who came up with the idea, explains how the project works. He said: “Our project is initially for children involved in vulnerable care or protection proceedings. These children can be anxious as the whole court process is alien to them.
“They will watch the video with a VR headset and get a clear picture of how the courts work and then become more comfortable and relaxed, it will hopefully remove some of the fear.
“We are using legal knowledge and technical expertise to partner with and help our community and the results so far have been incredible. It is very accessible for the children and the fact it is VR just makes them all the more keen to engage with it.”
To create the video the team from Salford filmed in the court of Manchester Civil Justice Centre using six cameras. They recorded everything from first entering the building and getting past security, to entering a court room and the whole process of a court hearing.
This was then turned into a fully immersive video with 360 views of the whole court experience.
The legal profession and judiciary in the region have been impressed with the results so far.
Sir James Munby, former President of the Family Division: “We need new and innovative ways to inform the children, parents and wider public about the mysteries of what we do, where we do it and what to expect. This project is both new and innovative and I am sure that is the beginning of a much greater use of this sort of application.
“Everyone involved deserves our thanks for the work done so far and the work they will no doubt do in the future.”
And The Honourable Mr Justice Hayden, Family Division Liaison Judge for the North Circuit, said: “This public law virtual reality project is quite simply one of the most significant developments in promoting the best quality evidence from children and young people to have occurred in many years.”
Dale Unwin, head of Cafcass in Greater Manchester, said: “The project has enabled vulnerable children to understand that there is ‘a process’ to care proceedings in the family court. This technology makes it possible for children to gain a better understanding of what happens in court without them having to be physically brought into the process or even attend the court building. This has the potential of benefitting literally hundreds of children over the next few years.”