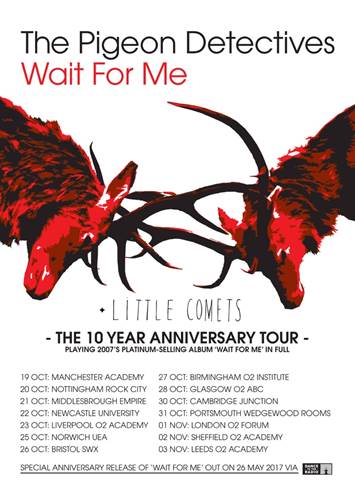 Leeds band The Pigeon Detectives are back touring this Autumn to celebrate the 10 year anniversary of platinum selling debut album ‘Wait For Me’ and they will be beginning their tour in Manchester.

Formed in 2002 The Pigeon Detectives are Matt Bowman on lead vocals, Oliver Main and Ryan Wilson on guitars, Dave Best on Bass, and Jimmi Naylor on drums.

The band enjoyed a meteoric rise starting in Leeds where they released their first single in 2005 with Leeds label Dance to the Radio, then growing into the UK Music scene rapidly with ‘Wait for Me’ which celebrates it’s 10th Birthday in May 2017.

Within a year of release singles from the album such as ‘Take her Back’, ‘I’m Not Sorry’ and ‘I Found Out’ had dominated the national airwaves. The band saw their live shows grow from DIY tours in small venues to 2 sell-out shows at Leeds Millenium Square and a headline show at Alexandra Palace in London.

Speaking about the re-release and tour singer Matt Bowman said: “We will forever be grateful for the opportunities and adventures that our debut album provided us with. For anyone that’s ever been to see us live, you know the connection we have with our fanbase is a special one. So we thought what better way to pay homage to the album on it’s 10th birthday than to take it on tour and play it in full for the first time ever!”

The band play Manchester Academy on the 19th October

Sasha to be joined by Dusky and Jon Dasilva for reFracted:live tour this...

The man who evented Dance Music is coming to Manchester