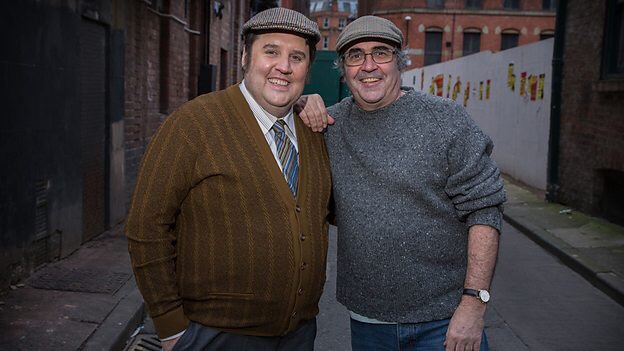 Peter Kay is to star in upcoming comedy Cradle to Grave, an eight-part series adaptation of Danny Baker’s autobiography, Going To Sea In A Sieve.
The series, set in 1974, follows the real-life events of Danny and his family, and is co-written by Jeff Pope and Danny Baker.
It is due for broadcast on BBC Two later this year.

Peter Kay says: “I am thrilled and honoured to be involved in a project of this scale. I’ve never known anything like it before, eight period half-hour episodes, shot as feature films and written to an extremely high standard by Danny Baker and Jeff Pope. It’s an exciting time.”

Danny Baker says: “Well this is weird and there’s no way around that. To see your life played out by actors is always going to be peculiar and also, frankly quite tremendous. I always knew these stories were thunderingly entertaining incidents and that I seemed to be hurtling through a particularly unpredictable, high-velocity life peopled by extraordinary characters. Now here they are. This will be a fantastic, rich voyage back to a boisterous often maligned era, true tales told large – a strong family in a magnificent working class community just getting on with life.”

In Cradle To Grave, 15-year-old Danny Baker is the guide through the ups and downs of life with the family. Fred ‘Spud’ Baker is a proud south London docker with a penchant for cheeky scheming. Wife Bet loves him deeply but longs for the family to go ‘straight’ and play by the rules. With eldest daughter Sharon’s looming wedding, the docks facing closure, and Danny’s struggles to get closer to the opposite sex, times are tough.

Co-writer, Jeff Pope says: “The most exciting part of this series is that it all happened. There is nothing funnier or more dramatic than real life and Danny and his family are a treasure trove of wonderful stories. To see Peter Kay take on a cockney character in ‘Spud’, Danny’s late father, is terrifically exciting.”

An aspirin a day keeps the bowel doctor away

Woman reunited with firefighters who rescued her from house fire – nearly 40 years...