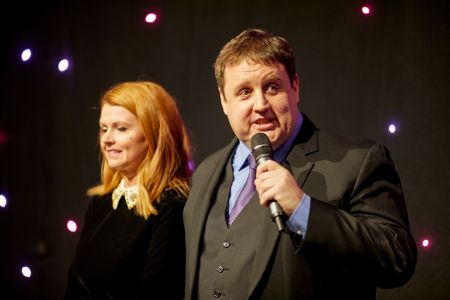 Peter Kay and Sian Gibson returned to their roots when the comedy pair officially opened the University of Salford flagship arts building.

The comedians were given a rapturous reception from students, staff and visitors at their alma mater, when they opened the £55m New Adelphi Building – which includes everything from professional quality TV studios to a band room large enough to record an orchestra.

The Phoenix Nights star said, who graduated from the University’s Media and Performance course in 1996, told the audience: “I don’t think I would have gone into stand-up if I hadn’t gone to Salford. They did a stand-up course in my second year. That gave me 10 minutes of material that I then entered the North West Comedian Of The Year with and won – and then it led to me being asked if I wanted to play clubs.

“I wouldn’t have had that but for Salford. I don’t think I would have gone into stand-up, I think I’d have carried on doing full-time jobs. I waited until I was 23 and I thought I needed to do what’s in my heart – and it weren’t working for Netto.”

They spoke ahead of a world premiere of new work by the playwright Jim Cartwright performed by stars including Warren Brown, Julie Hesmondhalgh and Sue Johnston in the building’s 350-seat theatre – marking the launch of the Cartwright Theatre Company, a professional group producing new work and based at the University.

Peter Kay was born and raised in Bolton and his course at the University of Salford launched the career of one of the great comics of our times.

Earlier, Peter Kay said: “As ex-Salford media performance students both Sian and myself are incredibly proud to be invited to open this magnificent arts facility and we’re excited to think of all of the creative work that will emerge from within it in the years to come.”

Frances Piper, Director of Performance at the University of Salford, said: “Peter Kay is one of the most successful British comedians of modern times and is a truly inspirational figure to many, so it’s a real honour for him to return to the University, where he studied hard, and where his comic brilliance was clear from day one.

“This really was a night to celebrate powerful northern voices and it was incredibly exciting to see new work performed by Jim Cartwright – one of the most important British stage writers of the last three decades – on the same night.”