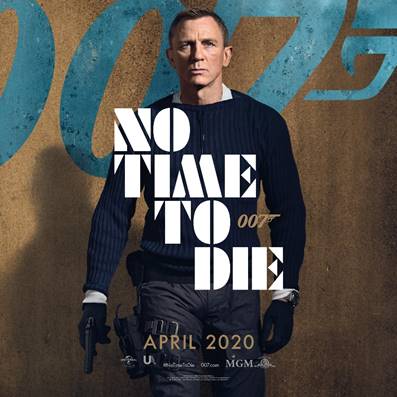 Following last night’s captivating performance by Grammy-winners Billie Eilish and Hans Zimmer at the BRIT Awards, Decca Records announces the release of Zimmer’s first ever Bond score: the official soundtrack to the latest film in the James Bond saga, No Time To Die (2020). Released globally on 27 March 2020, the soundtrack promises high drama, glamour and, of course, the famous Bond “suspense” motif.

The title track from the film No Time To Die, co-written [with brother Finneas O’Connell] and performed by Eilish, looks set to top the UK singles chart this week. 18-year-old Eilish joins an incomparable line-up of singers including Shirley Bassey, Madonna, Adele and Sam Smith as specially selected artists given the prestigious honour of providing a Bond theme.

Last month, Michael G. Wilson and Barbara Broccoli, producers of the James Bond film franchise, confirmed that Zimmer was to work on the latest 007 adventure. The composer expressed his delight at being asked to work on the legendary film series: “Having the opportunity to work on a franchise as iconic as 007 has been an incredibly humbling experience. Cary, Michael and Barbara are amazing collaborators, and we are all so excited for the world to hear the new sounds of James Bond in No Time To Die.”

Director Cary Joji Fukunaga added his praise: “I’m beyond excited that Hans is scoring No Time To Die. The music of Bond has always been iconic and I’ve already witnessed Hans adding his touch of genius to the Bond legacy.”

Joining Zimmer on scoring the soundtrack is Johnny Marr, who is also the featured guitarist on the OST, with additional music by composer and score producer Steve Mazzaro. Both have previously worked with Zimmer.

Decca will also release Bond 25 in celebration of the release of the 25th Bond film. This album includes brand new arrangements of the 25 iconic title themes, spanning nearly 60 years of cinema, including From Russia With Love, Diamonds Are Forever, Live And Let Die, GoldenEye and Die Another Day, newly recorded by the Royal Philharmonic Orchestra at Abbey Road Studios.

The film will have its world premiere in London on 31 March 2020 at the Royal Albert Hall, followed by the theatrical release globally from April 2 in the UK through Universal Pictures International and in the US on April 10 through MGM via their United Artists Releasing banner.

Ariana’s One Love concert in line for a BAFTA