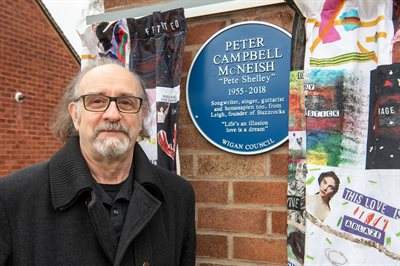 A blue plaque has been erected on the former home of Buzzcocks legend and Leyther, Pete Shelley.

Coinciding with the second anniversary of his death on 6th December, the plaque was unveiled on Friday 4th December on Pete’s childhood Pennington home, following talks between the Pete Shelley Memorial Campaign group and Wigan Council.

Deputy leader of Wigan Council, Councillor Keith Cunliffe said: “Pete was one of the UK’s most influential musicians and we’re proud to honour his memory with a plaque in his hometown of Leigh.

“The campaign group has done a fantastic job in raising funds and awareness of Pete as an icon and we were only happy to support them in their mission.”

Since January 2019, the campaign group has been raising funds for a permanent memorial in the town, as well as ensuring the plaque is put on public display. Later that year a blue plaque was created as a tribute to Pete’s contribution to the music industry. It was temporarily displayed at The Turnpike in Leigh.

Malcolm said: “Pete Shelley and Buzzcocks played a major, pivotal role in an evolving landscape of music and youth culture, not just here in Greater Manchester, but the world over.

“His heartfelt lyrics, with their sublime blend of assertive passion and romantic longing speak for everyone, with a universal and timeless truth that all genders can identify with.”

Wigan Council launched its Blue Plaque scheme in 2018 in line with its commitment to increase interest in local heritage and culture, as well as commemorating links between locations and significant moments in history.

As part of the scheme, the local authority committed to producing plaques until at least 2023, in line with its five-year cultural manifesto, The Fire Within.

In 2018, author, George Orwell, and politician, Thorley Smith, were honoured with blue plaques. The former is on display at The Museum of Wigan Life and the latter sits on the exterior of Wigan town hall.

Councillor Ready said: “Recognising those who have contributed significantly to the cultural history of Wigan Borough is extremely important. In line with our commitment to bringing culture to the roots of our communities, we need to celebrate these stories and ensure their achievements are permanently remembered so future generations can continue to appreciate our rich heritage.”

Pete Shelley is also featured in The Fire Within exhibition, ‘We Will Always Be Together xx’ at The Galleries shopping centre. He will also feature in the new archives exhibition at Leigh town hall, which will open in 2021.

Councils remain in the dark over vital youth offending cash

Can you help find missing Paulina?