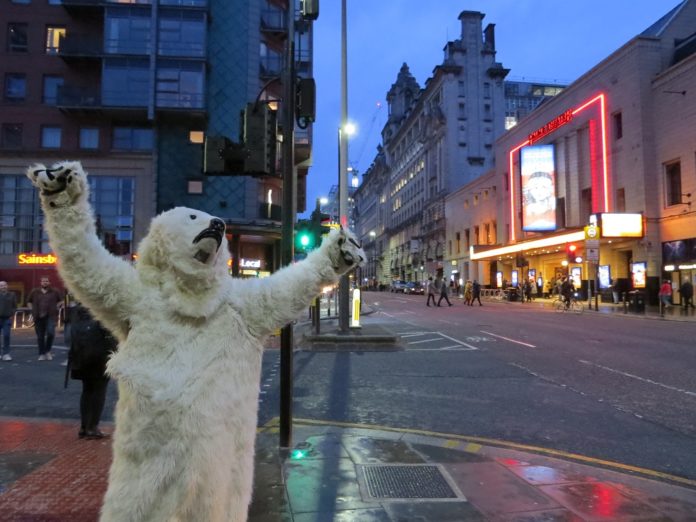 With the Global Climate Strike only days away, exclusive research by the Manchester Greenpeace Group has revealed that an overwhelming majority of Greater Manchester residents want urgent action on the climate emergency.

The surveys were carried out by volunteers from the Manchester Greenpeace Group when they toured the city centre with Sami, their climate change fighting polar bear.

Members of the public were asked what they believe to be the biggest cause of climate change, and what they think needs to be done to tackle it.

The recent IPCC report warned we have just over a decade left to cut our carbon emissions in order to keep global warming below 1.5 degrees.

In late July, Britain experienced its hottest day on record, with the mercury hitting 33 degrees here on 25 July, while a MET Office study revealed that the top 10 warmest years on record in the UK have all occurred since 2002.

Martin Porter a volunteer with the Manchester Greenpeace said:

“Nearly 90% of local people said they would support the government taking action to tackle climate change, even if this had a negative impact on their own lifestyle. They also identified fossil fuel exploitation, transport and agriculture as the biggest causes of greenhouse gases. People are already doing lots themselves to tackle climate change, including driving less, eating less meat and installing solar panels, but want Government to lead the way.

“What was great about these conversations was how positive people were that climate change was a problem we could solve. You can view this issue very negatively, and that the situation is hopeless, but most people that there is hope. I suppose having a big, cuddly polar bear with you helps.”