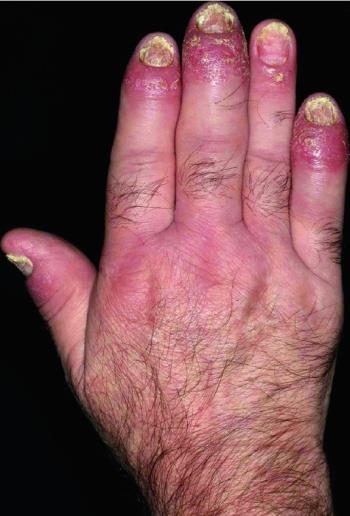 A class of drugs which have been successfully treating patients with severe rheumatoid arthritis should be made available for moderate suffers too, University of Manchester scientists say.

A study led by Dr James Gwinnutt reveals that some rheumatoid arthritis patients who do not qualify for biological treatments on the NHS have high levels of disability caused by the condition. It is published in the journal PLOS ONE.

The research, funded by Versus Arthritis is part of the Moderate Disease Activity in Rheumatoid Arthritis Study (MODRAS) directed by Dr Suzanne Verstappen from The University of Manchester.

Biologics are genetically engineered compounds which work on our immune system to reduce inflammation.

They have revolutionised rheumatoid arthritis treatment since they were introduced in the late 1990s.

The study of the BSRBR-RA , whose Chief Investigator Professor Kimme Hyrich, included researchers from the University of Manchester and King’s College London.

The data revealed that over three years, some of the people with moderate disease which didn’t fulfil the NHS criteria for biologic treatment had very high levels disability.

Previous randomised trials assessed by the team also showed that the treatments can help patients with moderate disease activity.

The NHS currently uses a disease activity score to assess if a patient is eligible for biological therapy treatment. The measure incorporates swollen and tender joint counts, blood test of inflammation and the patient’s assessment of their disease.

Only patients with a score greater than 5.1 and have failed two conventional therapies are currently only able to receive treatment with biologics.

Lead researcher Dr James Gwinnutt said: “Our study has shown that there is a definite mismatch between the levels of disability some patients endure and the criteria by which the NHS measures their eligibility for biological treatments.

“This research does seem to suggest that it this group of patients with moderate rheumatoid arthritis should be entitled to the biological therapies other suffers get.

“Better access to these successful drugs has the potential to change these peoples’ lives for the better.”

Dr Suzanne Verstappen said: “In many countries rheumatoid arthritis patients with moderate disease activity are successfully treated with biologics. This study shows that there are groups of patients with moderate disease activity which have a poor progression of their disease and would benefit from more aggressive disease management including treatment with biologics.”

A “tsunami of unmet need” warning for social care