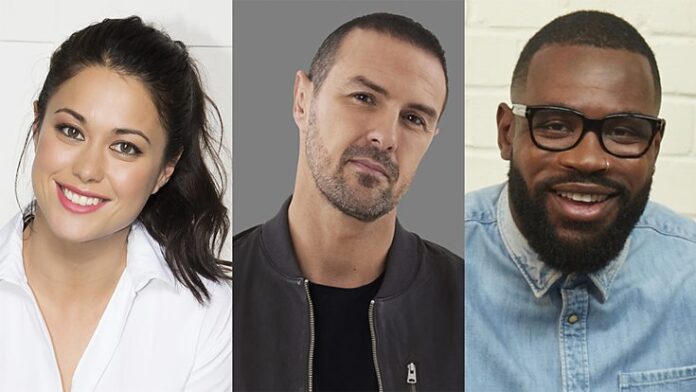 The BBC has today confirmed that TV presenter Paddy McGuinness will be the new host of BBC One’s long-running sports quiz A Question of Sport. McGuinness will be joined by new team Captains – sporting pundits Sam Quek and Ugo Monye.

McGuinness, who has become a firm favourite with UK and international audiences hosting motoring entertainment juggernaut Top Gear, also hosts popular BBC One Saturday night gameshows I Can See Your Voice and Catchpoint. He started his television career playing Paddy the doorman in That Peter Kay Thing which led to the massive spin off series Phoenix Nights followed by hosting duties on hit dating format Take Me Out. McGuinness annually participates as a player in the Soccer Aid charity football event for UNICEF.

Quek is a former international hockey player who won over 120 caps at the highest level and took home an Olympic gold in Rio as part of the victorious Great Britain team of 2016. Since retiring Quek has become a versatile sports presenter hosting the flagship 606 football show for Radio 5Live, NFL coverage on the BBC plus a variety of other sports including rugby union and horse racing for other broadcasters. She’s also been a finalist in both I’m A Celebrity Get Me Out of Here and Celebrity MasterChef.

Monye is a former international rugby union player who was the leading try scorer for the British & Irish Lions on their 2009 tour of South Africa. He starred for club and country from 2002 until his retirement in 2015, helping Harlequins to trophy success both domestically and in Europe. Since hanging up his boots Monye has become a well-respected rugby pundit for BT Sport and for ITV’s coverage of the 6 Nations tournament and he also presents the BBC’s weekly rugby podcast. His work with BBC Radio 5Live is now branching out to cover other sports.

Made by BBC Studios, A Question of Sport has been entertaining the nation for over 50 years with a mix of sports trivia and light-hearted fun. As the world’s longest running TV sports quiz, the show has hosted some of the biggest names to put their sporting knowledge to the test.

The new show will retain A Question of Sport’s most popular challenges and rounds but will also introduce some new elements to the format that will be revealed in due course.

McGuinness, Quek and Monye will begin filming for the new series during the summer and A Question of Sport will return later in the year to BBC One.

Paddy McGuinness says: “I love the fiercely competitive nature of sports stars coupled with having a laugh. That’s why A Question of Sport has always been one of my favourite shows and having been weaned on it from an early age, this is an honour and opportunity I’m certainly not taking lightly. I grew up with both Davids hosting but it’s Sue who made this show her own. She will always be A Question of Sport icon, but I’ll try my best to stamp my own mark on it.”

Sam Quek commented: “This really is my dream job! I’ve watched A Question of Sport since I was a little girl and my ambition to appear on the show came true five years ago – but I never thought that I would one day be a captain. And the first female captain in the show’s 50-year history too. I have some huge shoes to fill as Matt and Phil are two of the greatest captains to have ever appeared on the show but it’s thanks to trailblazers like Sue Barker that I now have this opportunity. I’ll give it my all and make sure I enjoy every minute of the ride. Oh, and Ugo… I’m coming for you!!”

Ugo Monye added: “It’s an incredible honour to be selected as A Question of Sport’s team captain. It’s a show I have watched my entire life, so to be named as a captain is truly humbling. A Question of Sport has had some phenomenal team captains from rugby over the years with legends like Bill Beaumont and more recently Matt Dawson, so I’m looking forward to hopefully adding to that list. I’d like to thank Sue Barker, Phil Tufnell, and Matt Dawson for making the show what it is today. I’m hoping to be as welcoming as they have been with guests, as competitive and have just as much fun!”