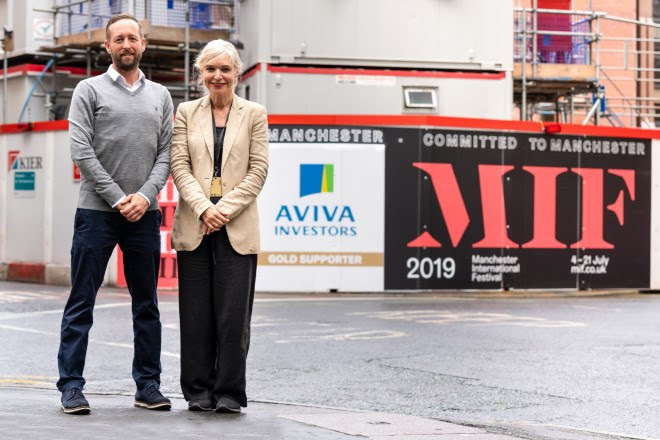 Manchester International Festival (MIF), which runs until Sunday 21 July, has raised more than £2.3 million from corporate sponsorship and philanthropic giving towards this year’s event, through a bold and ambitious fundraising campaign, which raises 10% of all the annual corporate giving in the UK outside of London.

Their support is vital to the success of the Festival, which attracts artists and audiences from across the globe, helps put the city on the world stage and in 2017 had an economic impact of £40.2 million.

This year’s Festival kicked off two weeks and a number of new investors, donors and philanthropists have joined the community that support MIF’s year-round work.

Aviva Investors see Manchester as a key location for investment and have a number of high profile projects in the city. Partnership with MIF is part of their commitment to support the cultural vibrancy and sustained growth of Manchester. Their partnership activation has seen them take work from Festival Square into one of their buildings at the Corn Exchange.

“As part of our long-term commitment to Manchester, we want to support initiatives that make a positive contribution to the local economy and community. Manchester International Festival is a fantastic showcase for the city and we are delighted to sponsor what I am sure will be a hugely successful event.”

Lendlease, who are managing the project to repair, refurbish and restore the Grade 1 listed Manchester Town Hall and enhance Albert Square have also joined as Gold Supporters.

Simon Gorski, Executive General Manager, Lendlease, said: “We’re very privileged to have been entrusted with the restoration of the Town Hall and supporting MIF is the perfect opportunity for us to demonstrate our commitment to Manchester. Festival Square is on our doorstep and we’re pleased to be able to support an event that will provide a significant boost to the local economy as well as the global reputation of this amazing city.”

Property Alliance Group returned to support the Festival with investment and a key piece of activation, which saw the Group’s new luxury residential tower included in a Festival commission: Manchester’s largest digital billboard on the Axis tower was used as part of The Anvil, an MIF commission that commemorated the 200th anniversary of the Peterloo Massacre.

Joining as a new hotel supporter for MIF is the beautiful and newly refurbished Radisson Blu Edwardian, Manchester hotel on Peter Street, which was also a key venue in The Anvil, when theatre company ANU took audiences around the city. It has been a host venue for a number of festival celebrations. Peter Street Kitchen has also supported MIF with a stunning collection of bespoke cocktails, titled Our Manchester International Festival Collection, featuring ‘Mulholland Drive, ‘City of Gold’ and ‘Trails of Vapour.’

Altrincham based residential developer Lovell have joined the roster of Silver Supporters as do The Hut Group, who recently acquired the city’s highly regarded Eclectic Hotels, along with a number of additional individual donors and supporters.

The Festival’s partners are creative in how they bring their support to life, ensuring that in addition to invaluable investment, without which the Festival would simply not be possible, there is a range of activity designed to enhance the partnership.

Examples this year include Bruntwood Dines, a pop- up dining experience for clients and colleagues of Official Partners, Bruntwood; students from Manchester School of Art, part of Gold Sponsor Manchester Metropolitan University, have designed furniture and interiors for Festival Square and in The Glasshouse there, they hosted ‘Manchester Voices’ , a one off event to celebrate award-winning writers and poets from Manchester Writing School; and Silver Supporters Manchester City Football Club had a takeover of Festival Square on 12 July, including a photo exhibition celebrating their incredible 2018/2019 season – and a display of all six of their trophies.

Christine Cort, Managing Director of Manchester International Festival said: “We are so grateful to all of our partners and supporters who truly help make Manchester International Festival the extraordinary celebration that it is, adding to the cultural vibrancy of our brilliant city, putting it on the map, not just nationally, but across the globe. MIF would not happen without their support and we’re delighted to be welcoming new supporters to the festival family. It’s a hugely pivotal moment for the Festival and this support will continue to be vital on the journey towards The Factory.”

“Manchester International Festival is one of the city’s key cultural moments attracting audiences from across Manchester, and visitors from around the world. We are delighted to see the business community providing essential support to the Festival which truly helps to promote Manchester as an international cultural capital, in turn attracting people to live, work, visit and invest.”