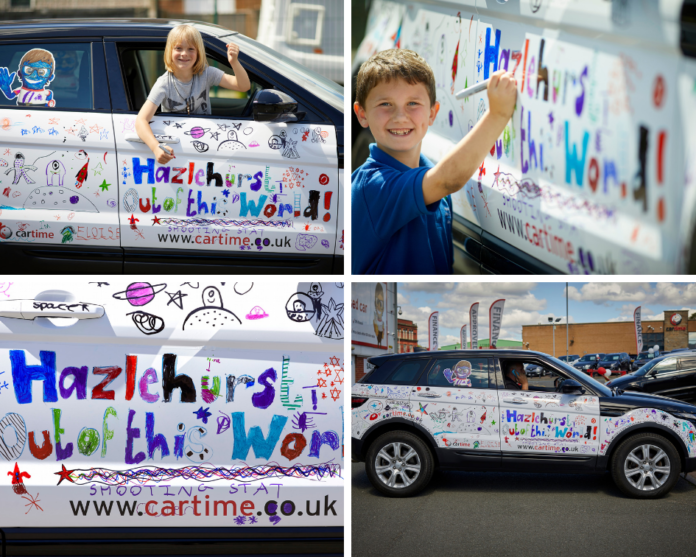 Students from Hazelhurst Community Primary School in Ramsbottom, have won a regional competition for their design on a specially wrapped 4×4.

Over 100 pupils aged from four to 11 took part in the competition, with a three-week public vote deciding the overall winner.

Receiving a total of almost 1,500 votes overall, Hazelhurst’s ‘out-of-this-world’ space-themed vehicle was declared as the winner with a total of 570 votes, securing them a prize of £500 for art supplies for their school.

The cARTime (car-art-time) competition was organised to celebrate the opening of cartime’s new specialist 4×4 centre in Bury. Images of each design were uploaded to cartime’s Facebook page, www.facebook.com/cartimebury, where the public could vote for their favourite vehicle.

cartime’s managing director, Matt Kay said: “We were extremely impressed with all of the designs produced by the students and well done to Hazelhurst on winning the competition. Just 43 votes separated the winner and runner up so it was extremely close.

“cARTime was inspired by the ethos of Children’s Art Week, which encourages children and young people to enjoy fun creative activities that they might not have tried before – we certainly hope none of the participants have ever drawn on a car!

“The overall competition has been very well received and all of the schools said the students thoroughly enjoyed decorating the vehicles which is great to hear.

“The cars received a lot of attention in our showroom and I’d like to thank all of the students who participated.”

Why sheds can be good for your health and well being