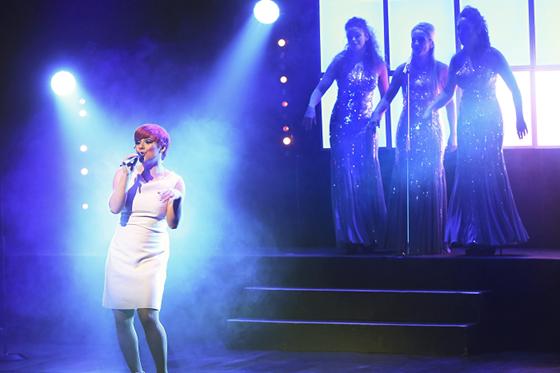 Cilla and the Shades of the 60’s was the smash hit stage show of 2017 when it toured the UK in February and March.  Starring the effervescent Victoria Jones as Cilla, the show had capacity audiences dancing in the aisles up and down the country to the greatest hits of the 60s performed by Victoria and trio The Shades.

In 2018 the show – refreshed and ready to rock its retro boots – will undertake a four month tour across the UK with Victoria Jones reprising her role as Cilla which includes an opening night in Heywood.

The perfect musical stage show for families and pop music fans of all ages, ‘Cilla and the Shades of the 60s’ takes the audience on a musical journey starting with the discovery of the teenage singer, Cilla Black, at Liverpool’s famous Cavern Club and presents many of the biggest hits by artists who changed the world of popular entertainment in the 1960s including Cilla, Dusty, Lulu, Tina Turner, the Beatles and more.

Taking a trip down memory lane, the show relives highlights of Cilla’s stellar career: by the time Cilla was 21 she was working with Beatles’ producer George Martin and was at No. 1 in the UK pop charts with ‘You’re My World’ and ‘Anyone Who Had A Heart’.  Her phenomenally successful career as a pop singer during the 60s and 70s led to her becoming the UK’s most popular TV presenter with her own TV show ‘Cilla’ which ran 1966-1978 and ‘Blind Date’ which ran for a record breaking 18 years.

Cilla was famous for her delicate vocals as much as her all-out belting: says Victoria Jones:

“Growing up in Liverpool, I knew Cilla as a TV presenter but when I discovered her music I was amazed by her vocal range and her emotional depth.  I find her ballads so beautiful and she portrays heartbreak in a truly moving way.  Her passion has always inspired me – in fact I think I was born in the wrong decade!  Performing as Cilla gives me the opportunity to celebrate the sound and fashion of a generation of amazing women.  I had such a brilliant time on tour earlier this year; I can’t wait to get out on the road again in 2018 especially as we’ll have the opportunity of performing in venues where we haven’t performed before.  We’ll have the fantastic Shades trio, beautiful dancers and a lorra lorra laughs!”