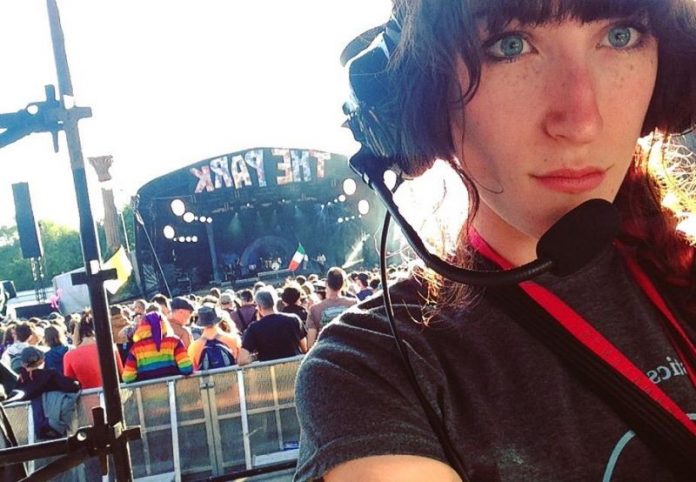 As thousands of people head to Glastonbury this weekend, a student at the University of Salford has a vital role to play at this year’s festival.

On International Women in Engineering Day, Elle Kalavsky, 20, will be working in a team of acoustic engineers to ensure sound levels are just perfect for every performance.

The second year student worked at the festival last year, and was invited back to work at the festival this year by Aria Acoustics, the sound monitoring company at Glastonbury.

Elle, from Warrington, said: “I really enjoyed working at Glastonbury last year, it was a full on few days but also very rewarding. I’m also a huge fan of live music, so seeing my favourite bands whilst working was a dream, the atmosphere is great”.

Elle’s work at Glastonbury coincides with International Women in Engineering day, which is an awareness day that celebrates the achievements of outstanding women engineers.

Elle, who is also a committee member for the North West branch of the Institute of Acoustics, continued: “I think it is so important to celebrate women who work in engineering. I think although things have got a lot better, there is still this stigma around engineering, as if it is a real guy thing to do. So girls really need to get out there, as there are still so few of us by comparison”.

Elle studies on the highly reputable BEng Audio Acoustics course, within the School of Computer Science and Engineering. The course offers students who have completed their second year the chance to carry out an industry placement for a year. Elle will spend her placement year working in the University of Salford’s acoustic testing and calibration labs.

She continued: “I was always interested in maths and physics since high school. When I went to college, I organised a few events like the Warrington music festival. Doing that made me realise that I wanted to find a mash up of music and physics, and that is when I discovered acoustics.

“I came to Salford because of the amazing facilities there are here. It is not an easy course, but the support that I get from the lecturers is fantastic. Coming here was the best decision that I ever made”.

Elle’s lecturer, Jos Hirst, said: “We are always very keen to have our students involved in industrial placements and have an option for our second year students to take a year out in industry. We also offer a number of short term work placements and one of these involves Aria Acoustics. Every year Aria ask us to provide one or two students to help out with the monitoring of sound levels at Glastonbury festival. This provides our students with a great real-life work opportunity and an impressive line or two on their CV. In a predominately male-orientated industry, it is great to see our female students and graduates do so well.”

Elle has a number of other gigs and festivals that she is due to work at over the summer, including Creamfields festival in Cheshire and Beatherder in the Ribble Valley.