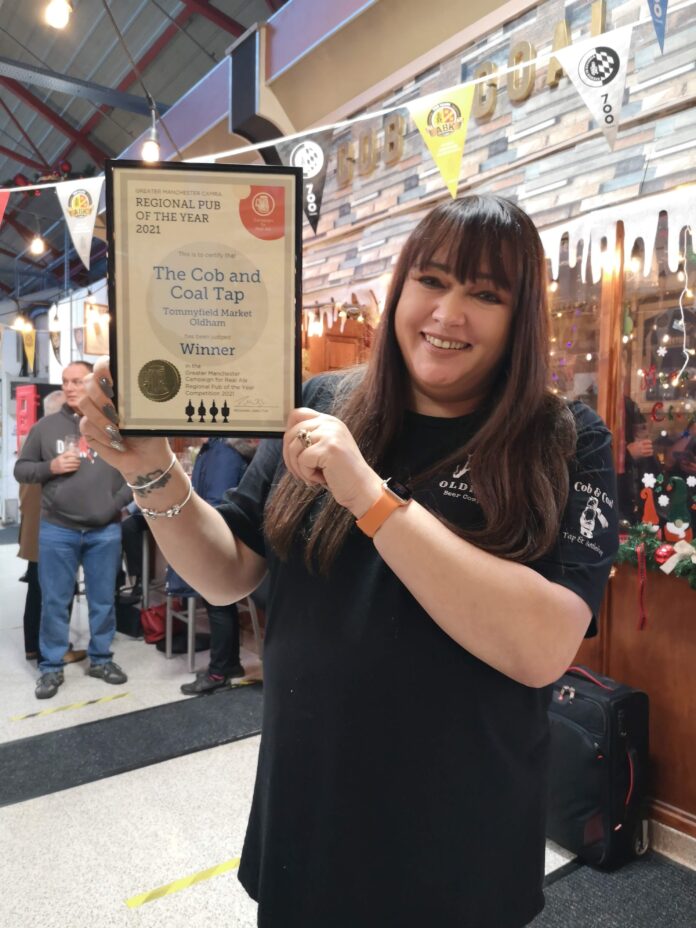 A microbar inside Tommyfield Market Hall has defied the problems of the pandemic and beaten the best pubs in the region to be judged Greater Manchester’s Pub of the Year.

Oldham’s Cob & Coal only opened in August 2019 and traded for six months before the first lockdown shut all pubs for months. Continued restrictions disrupted the business again before finally being able to welcome drinkers back to the cosy bar last May. Despite this short life, judges drawn from the membership of the Campaign for Real Ale (CAMRA) comprehensively voted the newcomer as the region’s Pub of the Year.

Landlady Michelle Riley is no stranger to running pubs across the area, with the White Lion in Delph and the Tandle Hill Tavern in Middleton among her previous tenancies. But the vision to create her own bar eventually led to a couple of vacant units inside the Market Hall and the transformation began.

Her commitment to real ale, properly looked after, means six handpumps serve a rotating choice, with many drawn from breweries within a 25-mile radius. Recent weeks have seen beers from Pictish, Thirst Class, Wishbone and Durham delight drinkers. Cider lovers are well catered for with a choice of up to eight, and explains why the Cob & Coal has won branch cider pub of the year for the last two years. And central to the bar top are three fonts dispensing ABK lagers from the 700 year-old Bavarian brewery, the only outlet in Oldham.

But judges mark more than just the choice and quality of drinks on offer. CAMRA’s regional judging organiser Caz O’Donnell said: “Our adjudicators are drawn from across the region, although the local branch are not involved at this level. They look for a commitment to the local community, and whether the venues reflect the wider aims of CAMRA. A friendly welcome and knowledgeable bar staff also feature highly in their assessments.

“Pubs have had to adopt to changing social and spending patterns, and the Cob & Coal is one of several microbars open in markets around Greater Manchester. Judges described it as ‘a little gem’. They liked the cooperation with other market traders providing hot and cold food, and the larger shared space immediately adjacent in which to enjoy meals and snacks with a beer. Although its opening hours have to comply with the operation of the Market Hall, it has achieved a loyal customer base in a relatively short and interrupted time. Locals and newcomers are equally welcomed. And of course the beer is excellent.”

The microbar’s name reflects the tradition of Oldham’s children singing “we come a cob coaling” around Bonfire Night, but Michelle explained the additional reference to her Leicester roots. “What people call a bread roll differs from place to place – and can cause a lot of arguments – but I knew it as a cob”, she said. “So trying to combine my birthplace with an Oldham tradition – it just fitted.” And visitors are left in no doubt as to Michelle’s allegiance to her favourite football team, Leicester City. Memorabilia jostle for space with reminders of Oldham’s past and an impressive collection of clocks.

Michelle continued: “It was a tricky start, with different pandemic measures meaning a stop-start to trade and a lot of uncertainty. I always believed we could make the Cob & Coal a great little pub. We were finalists in the Manchester Food and Drink Festival awards earlier this year, so I knew we were on the right track. But to win the 2021 regional title in competition with some other seriously good pubs has exceeded my expectations. It’s right up there with Leicester City winning the Premier League a few seasons back!”

CAMRA’s Regional Director Phil Moss was on hand on Friday 26th November to present the award to Michelle and husband Chris. He said: “It’s a delight to see how hard work, attention to detail and and emphasis on quality has made the Cob & Coal a worthy winner. The hospitality sector has been through the most difficult of times. This pub is valued by its community and I’m sure winning this award will bring it an even bigger audience. I just hope they can all fit in!”

Alongside the Cob & Coal, Michelle and Chris have redoubled their faith in Oldham as a destination of choice for drinkers. Just twelve months ago, they opened the town’s newest pub and sister venue, The Fox & Pine on Greaves Street.