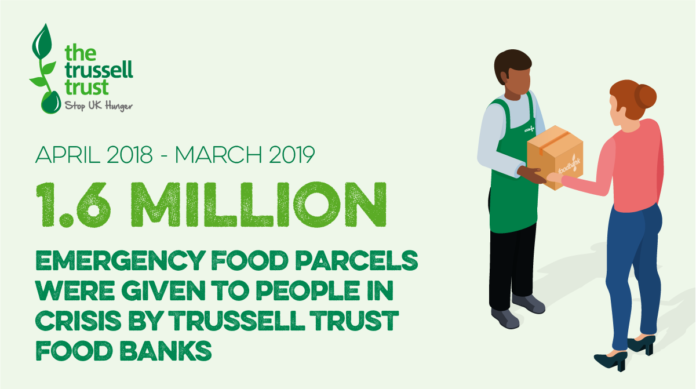 New data released today by the Charity Trussell Trust shows April 2018 to March 2019 to be the busiest year for food banks in the  Trust’s network since the charity opened.

During the past year, 1,583,668 three-day emergency food supplies were given to people in crisis in the UK; More than half a million of these (went to children, an 18.8% increase on the previous year.

The main reasons for people needing emergency food, say the Charity, are benefits consistently not covering the cost of living , and delays or changes to benefits being paid.

Universal Credit is not the only benefit payment people referred to food banks have experienced problems with, but issues with moving onto the new system are a key driver of increasing need.

Almost half of food bank referrals made due to a delay in benefits being paid in UK were linked to Universal Credit.

From this data, and other insights from food banks in the Trussell Trust’s network, the charity believes ending the five week for a first Universal Credit payment should be the Government’s first priority to help create a future without food banks.

“What we are seeing year-upon-year is more and more people struggling to eat because they simply cannot afford food. This is not right.

“Enough is enough. We know this situation can be fixed – that’s why we’re campaigning to create a future where no one needs a food bank. Our benefits system is supposed to protect us all from being swept into poverty. Universal Credit should be part of the solution but currently the five week wait is leaving many without enough money to cover the basics. As a priority, we’re urging the government to end the wait for Universal Credit to ease the pressure on thousands of households.

“Ultimately, it’s unacceptable that anyone should have to use a food bank in the first place. No charity can replace the dignity of having financial security. That’s why in the long-term, we’re urging the Government to ensure benefit payments reflect the true cost of living and work is secure, paying the real Living Wage, to help ensure we are all anchored from poverty.”

“It is just wrong that in our society a growing number of people, including children, are going hungry because of our consistent failure to get to grips with poverty. When the use of food banks reaches a record high we are beyond the language of warning signs and wake up calls. Unless we take bold action to solve poverty we risk undermining what we stand for as a country.

“None of us want to live in a country where a child’s health, education and future prospects are restricted because their family is locked in poverty. But this is far too often the reality across the UK. If we are to build a compassionate and just society we must work together to act on the concerns of families struggling to make ends meet.

“Low pay, insecure work, high cost of living, especially housing, and an ineffective social security system are holding people back from a decent life. At a time when we are deciding the future of our country we must redesign the systems that lock so many people in poverty.”