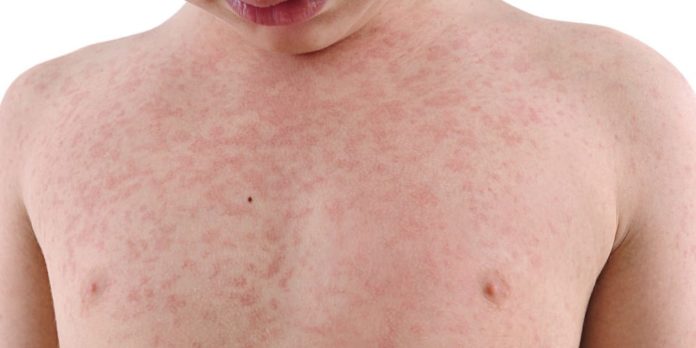 More measles cases have been confirmed in Greater Manchester so far this year than in the whole of the previous two years combined.

Figures from Public Health England (PHE) show there had been 47 cases across Greater Manchester in 2019.

PHE North West is reminding people to make sure their children are up to date with their routine vaccinations as data indicates a slight decline in uptake for childhood immunisations.

Latest figures show that the percentage of children vaccinated against measles, mumps and rubella (MMR) by their second birthday in the North West decreased from 94.9% in 2012/13 to 92.9% in 2017/18.

“In the UK we have a world-leading vaccination programme with vaccine uptake rates in England currently among the highest in Europe. However, there has been a small, steady decline in infant vaccination uptake since 2013 and we are still seeing outbreaks, sometimes serious, of diseases that can be prevented by vaccines.”

“The recent measles outbreak in Greater Manchester with 47 confirmed cases, predominantly in unvaccinated children, is a stark reminder that we still have work to do. Vaccine heroes in the NHS are doing amazing work day in and day out but it’s down to all of us to continue in our efforts to make sure children are offered vital protection against the risk of serious illness.”

Despite the year-on-year decline in uptake, latest quarterly data from PHE could be beginning to show early signs of a reversal, though it’s too early to predict what final annual uptake figures may show.

The latest quarterly data suggests that vaccine coverage at 12 months of age increased by 0.4-0.9% for all vaccines compared with the previous quarter. This follows slow declines in uptake since 2012-13. According to research by the Royal Society of Public Health these small drops may be due to timing, availability and location of appointments.

Members of the public told to self-isolate if they experience a lost of taste...