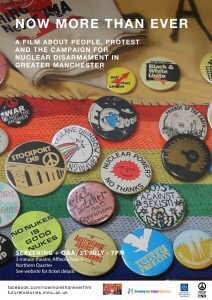 From the founding of the national Campaign for Nuclear Disarmament and the Aldermaston marches in the 1950s to the start of a local branch in the 1970s; from Greenham Common peace camp in the 1980s right up to the present day with protests against Trident nuclear weapons system – up for renewal and a hot topic in the most recent election –Greater Manchester and the surrounding area has been at the heart of the action.
Now this week sees a special film screening of ‘Now More Than Ever: People, Protest and the CND in Manchester’ on Friday 31 July 2015 at 7pm, at the 3-Minute Theatre, Manchester.

The film has been made by doctoral researchers Leanne Green and Hannah Ellul, in collaboration with Greater Manchester District Campaign for Nuclear Disarmament , who have been part of of MMU’s Creating Our Future Histories Training Programme.NMTE CND

This film brings together some of these stories. It includes 97 year old veteran campaigner Betty Tebbs in conversation with actor Maxine Peake about the Cold War, Amy Gilligan on a formative trip to Hiroshima, Japan as a teenager, Pat Sanchez on blockading nuclear weapons sites chained to a six foot squirrel, and many more. In these tales, the researchers hope to get a sense not only the history of an organisation, but of the people who make it, the changing nature of activism, and just how much continues to be done as we look to the future.

To reserve your free place for the screening, please book here.