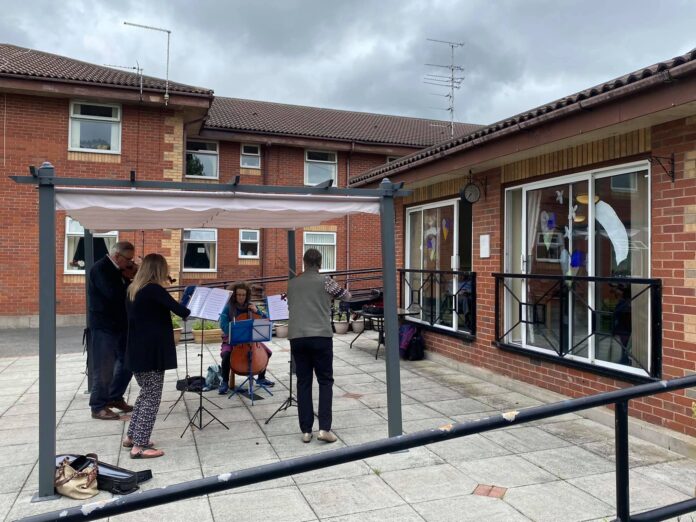 The Northern Chamber Orchestra, the oldest professional chamber ensemble in
the North West of England returns to the stage on Saturday 3 October to play two
concerts for socially distanced audiences.

These are the orchestra’s first staged performances since February; however, the musicians have kept themselves busy with outdoor concerts and online videos.

The concerts take place at the orchestra’s Macclesfield home, the Heritage Centre, and
run for an hour each. The programme has been planned with social distancing guidelines
in mind, meaning less space for musicians on the stage. It includes Beethoven’s Septet,
in celebration of the 250th anniversary of the composer’s birth and gives the orchestra’s
principal players a chance to shine.

Also on the programme are Baermann’s Adagio for clarinet and strings, and Schubert’s Quartettsatz The concerts will be an hour-long with no interval, and the programme will be performed at 17:30 and 20:00 with a thorough cleaning of the auditorium and all touchpoints in between.

For those not ready to attend in person, the concert will also be recorded, and the video will be available to rent for one week from the day after the concert.

Due to the COVID-19 outbreak, the NCO was forced to cancel the remainder of its 2019-
20 season, which would have seen violinist Anthony Marwood and pianist Benjamin
Powell joins them for concerts in Macclesfield and Manchester. Alongside this came the
cancellation of the Buxton International Festival in July, for which the NCO are the house
orchestra.

However, the musicians were able to perform a free, outdoor string quartet concert led from the violin by the NCO Artistic Director Nicholas Ward in Buxton one July Sunday, which saw a socially distanced audience enjoying many short pieces in the sunshine.

“As we were unable to perform together this year, the Northern Chamber Orchestra and Buxton Festival have come together to record this song which beautifully echoes our yearning to be reunited.”

Over the summer, the Northern Chamber Orchestra also ran a series of care home
concerts as part of its Mind Music series, which takes musicians into care homes to work
with people living with dementia.

The residents enjoyed recognisable music such as Mozart’s Eine Kleine Nachtmusik and Bach’s Air on a G String along with singalongs including the White Cliffs of Dover and Singin’ in the Rain.

“It’s clear that art and entertainment have never been more important at a time like this. Many of the homes I’ve spoken to have felt the need for music given how significant a role it plays in their residents’ lives and they have been delighted to welcome the Northern Chamber Orchestra musicians for these outdoor concerts and welcome music back.”

Thanks go to the NCO’s main season sponsor CDL, and the Arts Council England emergency funding, without which these concerts would not have been possible. Details of the October concert and the orchestra’s future plans can be found at the NCO website.