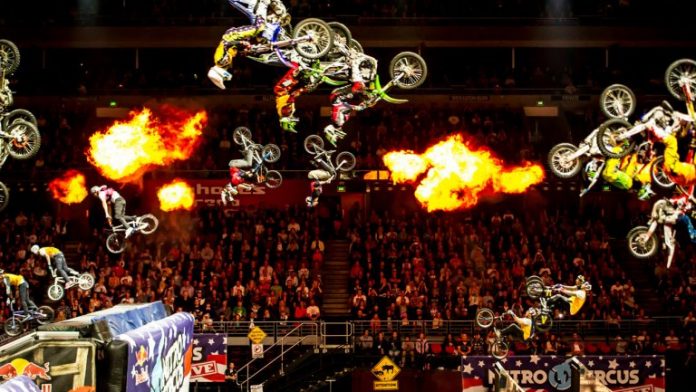 Motocross star, Travis Pastrana and friends are revving up for this Europe-wide journey that sees the American riders deliver a fast-paced and funny two-hour-long show to audiences.

The Manchester event is taking place at the MEN Arena on 22 November and will be the third night of the all-action event in the UK.

Originating in 2003 in Utah, Nitro Circus Travis and his crew devised a skillfully outrageous series of leaps and jumps that catapulted them into the limelight. By 2006, Nitro Circus had hit the small screen as a reality miniseries broadcast on MTV, and in 2009 it was turned into a full-blown television series, running for two seasons.

As well as being packed with all the dazzling tricks, wild stunts and base jumps we’ve seen on TV, this live event is set to feature bigger ramps, higher jumps and more. World-class athletes in FMX, BMX, inline and scooter will gather to showcase their skills and wow the crowds.

Sponsored by SkateHut, the action-packed show is set to set pulses racing.

Mark Johansen-Berg, Founder and CEO of SkateHut, said: “We’re proud to sponsor such a spectacular event. This is a fun-packed show that will see some of the most exhilarating tricks performed by some of the most talented riders the world has seen.”

For the ultimate Nitro Circus experience, Nitro Club offers access to premier seats, plus the opportunity to meet some of the stars at an autograph signing session. Pass holders will also get to watch pre-riding practice and receive a special souvenir.

Travis Pastrana, the brainchild behind Nitro Circus, was riding one-speed motorcycles at the age of four. Riding is in his DNA and, although he’s a natural mountain biker and academic – having graduated from high school three years early – he has always been drawn to motorsports. He’s won multiple awards, from five Loretta Lynn National Amateur crowns right up to being awarded 17 X Games medals.

Egg-cellent Easter offers and events at The Printworks