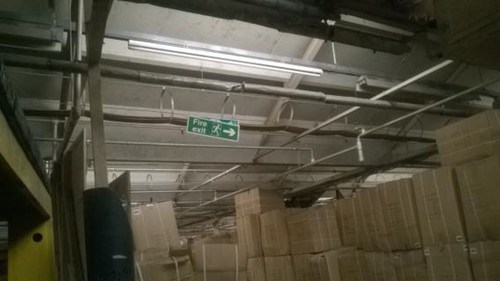 A Manchester company that breached numerous fire regulations has been ordered to pay more than £65,000 in fines and court costs.

T&A Textiles & Hosiery Ltd put its workers at risk at its warehouse in Newton Heath and was sentenced at Manchester Crown Court following a prosecution by Greater Manchester Fire and Rescue Authority.

Specialist officers inspected the site in July 2014 as part of a multiagency operation led by Home Office Immigration officers.

The inspection revealed that a large warehouse on the site had noworking fire alarm, all emergency exits either locked or blocked with no emergency lighting and Thousands of cardboard boxes with no clear breaks between stock or walkways for workers to escape

Officers also found that due to the layout of stock, a fire would develop quickly and would further reduce the likelihood workers could escape alive.

Elizabeth Dudley Jones, prosecuting for the GMFRA, told the court: “There were severe deficiencies in the provision of an adequate number of emergency routes and fire exits, the state of storage of combustible material and the failure to ensure routes to emergency exits were clear, the locking and fastening of emergency doors within and the lack of any emergency lighting in any of the premises, putting at least 20 persons lives at risk in the event of a fire.

“On the date of the inspection immigration and enforcement officers encountered 20 persons working in the warehouse area, 11 of whom were found to have no permission to work or have lawful basis to remain in the UK. These people may not have been reported or accounted for in the event of a fire.”

At an earlier hearing, T&A Textiles admitted seven offences of putting people at risk of death or serious injury by failing to put in place proper fire safety measures.

At the sentencing Ben Nolan, QC for the company, told the court that despite having been a moderately profitable business in the past in the last year the company had made a loss and any fine imposed should be considered in light of the impact of the business and its employees.

Boosting big city economies like Manchester could generate more than £9 billion in extra...