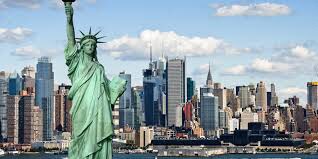 Jet2CityBreaks has today announced its New York breaks are back for winter ‘16, with more trips than ever before for North West passengers,plusthe exciting addition of New Yearbreaks – all on sale today.
A celebratory SIX trips are available this year direct from Manchester Airport, plus all breaks to New York have been extended to four-nights with even more iconic three, four and five star hotels to choose from.

As in previous years, flight times are scheduled to the get most from the city that never sleeps, but this time there’s even more choice available; from family-friendly departures over October half term to squeezing in every last opportunity to shop, and of course the unmissable opportunity to welcome in the New Year in New York’s Times Square, there’s something for everyone.

Departures from Manchester Airport to Newark are scheduled as follows:

Steve Heapy, CEO of Jet2.com and Jet2CityBreaks said: “New York really is something to shout about, which is why we are thrilled to be able to offer customers this experience direct from Manchester Airport. This is our most ambitious programme yet with more choice of flights and hotels than ever before. I’m sure these breaks, be it shopping, October half term, Thanksgiving and the newly added New Year packages will be a real cause for celebration!”

Packages with Jet2CityBreaks start from £759 per person, and they can be secured now for only £60pp deposit. Jet2.com flight only options are also available from £399 per person, including taxes.

Treat Mom to fizz and feast this Mother’s Day