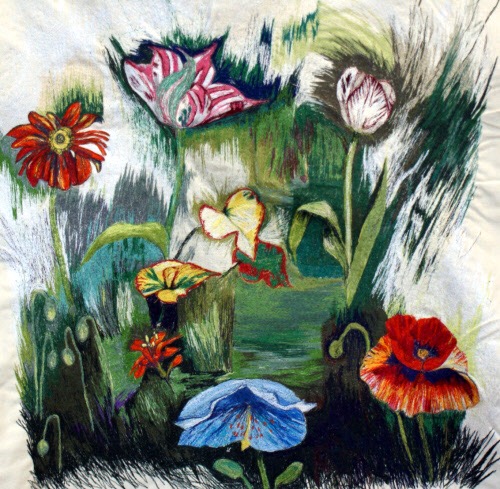 A new Gallery One exhibition at Touchstones Rochdale which opens this weekend, showcases the work of the local artist Glennis Brierley, who died tragically in December 2013.

This exhibition ‘Celebrating A Creative Life’ celebrates the richness and diversity of Glennis’s artistic talents through paintings, drawings, embroideries and mixed media work representing a lifetime of creativity.

Celebrating A Creative Life shows the whole range of Glennis’s work from her time at Manchester Polytechnic to her most recent pieces completed just before her death.

From her earliest work onwards, whether a linocut print of a cat, a pencil drawing of a dead bird or an abstract painting, Glennis demonstrated her strong sense of composition, her eye for detail and her distinctive, sometimes quite graphic style of drawing.

Glennis had always drawn and made art since she was a child. Brought up in York Buildings, in the shadow of Strangeways Prison in Cheetham Hill, Manchester, Glennis as a young child often used to walk to Woolworths in the city centre and buy a packet of pencils and a pad of paper to draw upon for as long as she could make it last. Unfortunately none of those drawings survive.

After leaving school she did a Foundation Course at Rochdale College of Art then, after the births of both her children, a degree and Masters in Fine Art at Manchester Polytechnic.

Glennis was a lecturer in Painting and Drawing at Rochdale College of Art through the 1980s and up to 1997, all the while producing her own artwork as well studying part time to qualify as a counsellor in 1995. Having taken voluntary redundancy in 1997 she embarked upon four years part time study at the Metanoia Institute in London and finally qualified as a Gestalt Psychotherapist in 2003.

At the time of her death she was still working in private practice as a psychotherapist, as well as producing and exhibiting her own artwork.

One of the significant events in her creative development was her decision to join the Imagengine Artists Co-operative in 2003 with Louise Day, Christine Clarke, Noreen White and other artists. Glennis exhibited her work in their group exhibitions in the Touchstones Gallery in Rochdale, the Coach House in Littleborough, the Bankfield Museum in Halifax and other venues in North West England.

Glennis never limited herself in the media she used to create her artwork. In her earlier works she used pencil, charcoal, conte crayon, graphite, oil pastels, pencil crayons, paint, wax and found materials. In the last fifteen years she had also started to work with fabrics in a variety of ways including dyeing, machine embroidery, appliqué, collage and batik to create very distinctive, unique images.

Although Glennis produced some abstract pieces, most of her artwork was representational and in recent years she drew a lot of inspiration from plants, gardens and the natural world.

Whether using watercolours as in ‘Small Daffodil’, pencil as in ‘Aloe Vera’ or machine stitch as in ‘Energy’ she was never just reflecting the world, but also conveying some of her own personal dynamic engagement with it. The background to the drawing ‘Seed Nests’ illustrates this well. She created the nests herself after cutting the grass in her garden and raking it all up.

Noticing the way in which the damp grass clung together in blobs she picked up clumps of it and started moulding it into shapes. From this grass she created a number of ‘nests’ which she put on a low wall in her garden. It was some time later, as they dried that she put them together and started drawing them.

Speaking about the show, Francis Taylor (partner of late Glennis) explains: “Glennis had a creative attitude to everything in her life; art, psychotherapy, possessions and relationships. She always tried to develop new ways to engage with the world and her creative energy is sadly missed. Her artwork is at least a tangible reminder of her lively, lived creativity”.

The exhibition opens on Saturday 21 February and is on display until Saturday 30 May 2015. Gallery One is the community gallery at Touchstones Rochdale and is dedicated to exhibitions by people and groups who live or work in the borough of Rochdale.

Drunch club in the clouds