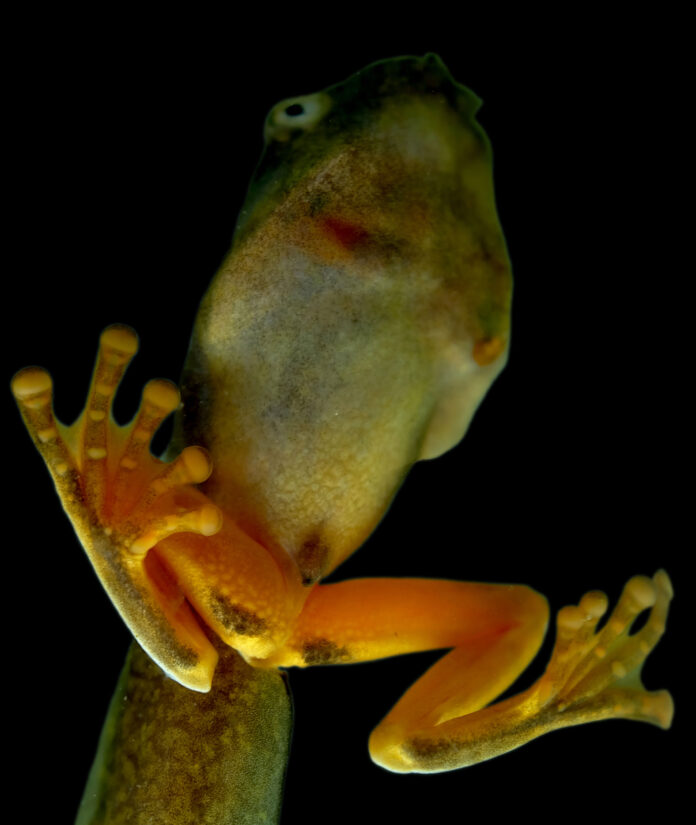 New collaborative research led by Manchester Museum, part of The University of Manchester, has resulted in the first scientific description of an extremely rare tadpole.

The Cruziohyla calcarifer, also known as the Splendid Tree Frog or Leaf Frog, originates from Ecuador and is extremely difficult to observe in the wild. Less than 50 adult specimens have ever been found, and five of its tadpoles are currently being housed at Manchester Museum.

Almost nothing has been known of the frogs’ breeding biology to date and a visual description of it in tadpole form has never existed.

Following captive breeding in Germany, an extensive piece of research led by Andrew Gray of Manchester Museum, which details of the tadpole’s unusual appearance, have now been published.

It is characterised in having a distinctive mouth shape and unusual markings.Andrew Gray, Curator of Herpetology at Manchester Museum explained:

“We’re delighted that we can now clearly visualise the tadpole of the Cruzihyla calcarifer for the first time ever. It has a couple of distinguishing features including what looks like the letter M on its back – so it’s very fitting that part of the research took place here in Manchester!

“Once fully grown, the adult frog has black and orange flanks along the body, and a brilliant yellow surround to its beautiful grey eyes.

“This work represents a wonderful collaboration between a researcher from Germany, the museum in Paris, and a PHD student from The University of Manchester’s faculty of Biology, Medicine and Health. It also exemplifies Manchester Museum’s mission to build understanding between cultures and a more sustainable world.”

This break-through follows another key scientific description at Manchester Museum, where a new species to science, Sylvia’s Leaf Frog was also described. The Manchester Museum was the first institution to breed that species, where the vivarium team recreate the exact conditions the frog enjoys in Costa Rica, Central America.