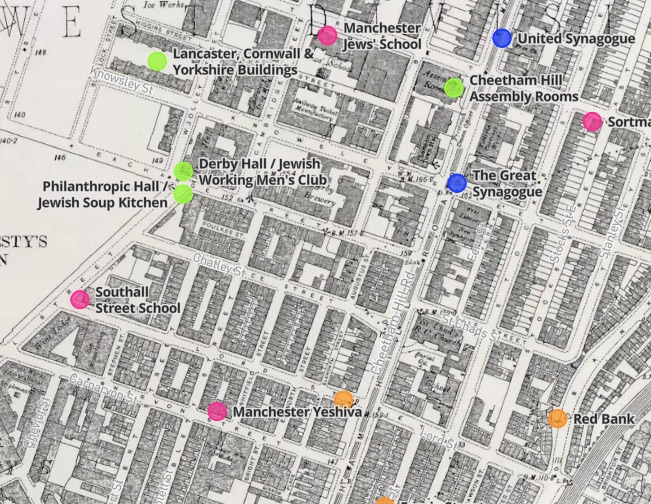 A new digital ‘memory map’ that tells the stories of the Jewish community in Manchester between the wars has been produced by a University academic.

The Memory Map of Jewish Manchester aims to create a lasting and living document of the Jewish community who once lived in the Cheetham Hill, Strangeways and Hightown areas of North Manchester during that era.

Led by Dr Rachel Lichtenstein from Manchester Metropolitan University, the map enables users to explore sites that occurred in people’s recollections – including shops, synagogues, schools, cinemas, cafes, streets and youth clubs. Some of the buildings no longer exist, but the location will be marked, and users can listen to excerpts from oral history interviews, see photographs and read information.

Dr Lichtenstein is a British artist, writer and curator who is internationally known for her books, multi-media projects and artworks that examine place, memory and Jewish identity.

Dr Lichtenstein, Reader in English and History at Manchester Metropolitan said: “The Memory Map of Jewish Manchester follows on from the pilot project exploring Jewish East End of London, which launched during lockdown in March 2020 and has since provided a considerable source of joy to thousands who have accessed this freely available resource.

“I hope this digital project, with wonderful audio stories provided by Manchester historian Ros Livshin and the Manchester Jewish Museum, will prove to be equally popular with the Jewish community of Manchester and beyond.”

Map users can find out more about Manchester’s Jewish community, which dates back to the eighteenth century and grew from the 1880s onwards as thousands of poor Yiddish speaking refugees settled in the city, after escaping persecution and economic difficulties following violent pogroms overseas, economic hardship and to escape forced conscription.

As the community established themselves they began to move away from the areas of Cheetham Hill and Red Bank to the suburbs of Hightown and Higher Broughton.

The Jewish population was further increased by the arrival of refugees from Nazism in the 1930s, Holocaust survivors after 1945, and Egyptian, Hungarian and Iranian Jews in the 1940s and 50s. Today Manchester has the second largest Jewish population in Britain consisting of a diverse community of approximately 35,000 secular, Haredi, Hasidic, ultra-Orthodox, Modern Orthodox, Sephardi, Reform and Ashkenazi Jews.