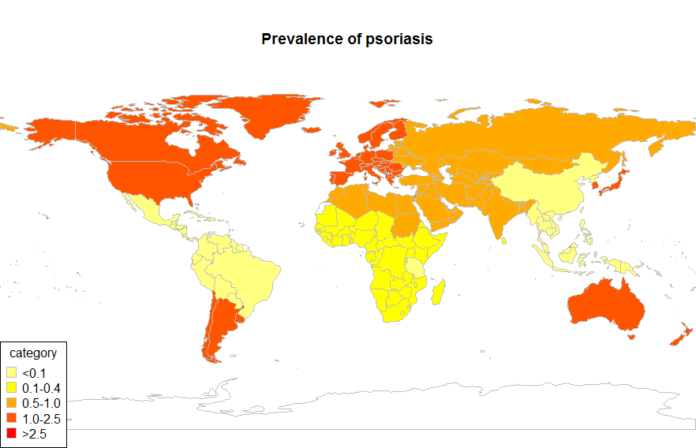 Around 1.7% of the UK population are affected by the chronic skin condition psoriasis, according to researchers at The University of Manchester and the University Medical Center Hamburg-Eppendorf.

The figures, which have never been compiled before, are published today in the world’s first Global Psoriasis Atlas, an interactive web platform which aims construct a global picture of psoriasis. It is published on World Psoriasis Day today (29 October)

The team carried out extensive search of all available evidence and used the data in a statistical model to generate estimates of the prevalence of psoriasis for every country of the world.

Previously, such detailed information has only been available for a very small number of countries.

Also according to the Atlas, the country most affected by psoriasis is Norway with a prevalence of 1.98% of the overall population. The lowest prevalence is across East Asia at 0.12%.

Around 2% of the West’s population are affected and the region with the lowest prevalence is East Asia with a prevalence of 0.12%.

The UK is ranked 21st in countries with the highest prevalence of psoriasis worldwide , corresponding to approximately 1·1 million people affected by the disease.

However, the research team say the estimates could increase to 1.8 million or 2.78% when taking self-reported and underdiagnosed psoriasis into account.

Professor Chris Griffiths from The University of Manchester said: “Our understanding of the epidemiology of this chronic condition is limited in many countries but we believe the Global Psoriasis Atlas will radically transform this in the future.

“It will uncover the true burden of the disease, ensuring those people living with psoriasis have access to the best available care, wherever they live in the world.

“That is why we believe the Global Psoriasis Atlas is a significant milestone: for the first time we will have robust information on how many people psoriasis affects worldwide which in turn will start to address inequalities in its care.

”It will serve as a valuable source of information about psoriasis for researchers, policy makers, patients and healthcare providers across the world.”

“But that might be down to the fact that high-income countries have better healthcare systems, more awareness of the disease and better data quality.

“Additionally many people with psoriasis in least developed countries do not have access to care.”