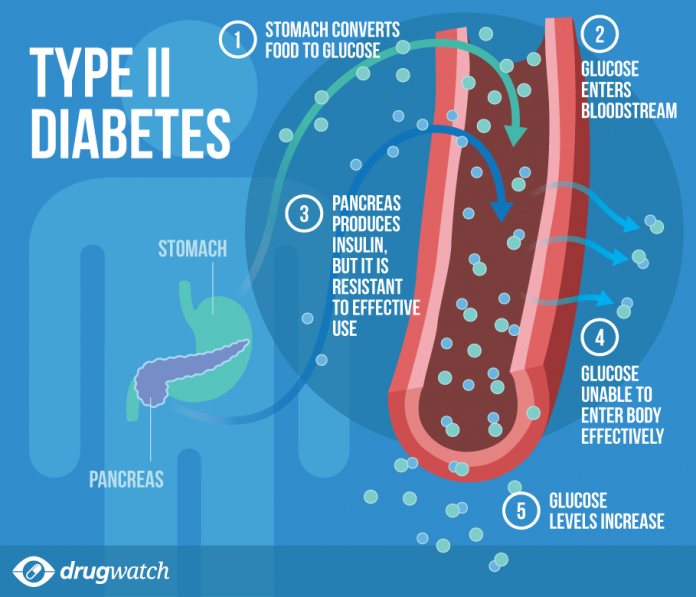 Nearly 240,000 people living with Type 2 diabetes are diagnosed with heart disease or stroke in England and Wales each year, according to new estimates by the British Heart Foundation (BHF).

Furthermore, experts warn these figures are on the rise as the population ages and population levels of obesity rises.

They are also 2.7 times more likely to be diagnosed with heart failure.

When someone has diabetes, they have high levels of glucose in their blood which can damage the walls of their arteries, and make them more likely to develop fatty deposits. If these fatty deposits rupture, causing a blood clot, they can lead to a heart attack or stroke.

The BHF says the figures show the urgent need for more research to improve treatments for people living with heart disease and diabetes.

The charity also says greater support is needed to help people with diabetes lower their risk of future heart disease and stroke.

In the UK today, around 4.2 million people are living with Type 2 diabetes, with a further 11.9 million at increased risk of the condition.

Through the National Charity Partnership, the BHF, Diabetes UK and Tesco are helping millions of people lower their risk of heart disease and Type 2 diabetes through a range of healthy eating and physical activity initiatives. Since 2015, the partnership has raised £21 million to drive forward initiatives to help people improve their lifestyle and fund more research into preventing and treating these chronic conditions.

Dr Mike Knapton, Associate Medical Director at the British Heart Foundation, said: “These estimates are a stark reminder that people living with diabetes are 2-3 times more likely to suffer a heart attack or stroke. The tragedy is that often the onset of these conditions can be prevented, while research could lead to new treatments. Our unique partnership with Tesco and Diabetes UK is enabling us to fund research in to new ways of preventing these deadly conditions and our nationwide programmes are helping people transform their lifestyle.”

Jenna Hall, Programme Director for the National Charity Partnership, said: “Thanks to the generosity and dedicated fundraising of Tesco colleagues, this partnership between the BHF, Diabetes UK and Tesco is able to make significant progress towards ending the devastation that Type 2 diabetes and heart and circulatory disease can bring. As well as funding research, we have so far helped more than one million people get more active and supported thousands of families to pick healthier food choices – two factors that can help people reduce their risk of these serious conditions.”

Andrew Schofield, 46, a Tesco store manager in Cheshire, was diagnosed with Type 2 diabetes in 2013. He says: “When I was diagnosed, my first thought was for my children and what I needed to do to make sure they didn’t grow up without a father. I know that if I’m not careful, I could develop complications associated with my diabetes, including heart disease – and that’s a scary thought. I still want to be around in old age, talking to my grandkids and not being visited by them in a graveyard.

“I’m so grateful for the knowledge I’ve gained because of Tesco’s National Charity Partnership with Diabetes UK and the BHF. I’ve learnt a lot about my condition and how to manage it, and the support has been invaluable. Since I was diagnosed with Type 2 diabetes, I’ve tried to keep myself focused on activities; to raise money for the partnership, but also to give myself some exercise. I’m definitely fitter and more positive about my future than when I was first diagnosed.”

Tesco colleagues this month are taking on a walking challenge of their own as Tesco continues its commitment to helping customers and colleagues live healthier lives by setting out on The Great Tesco Walk, a month-long trek between Land’s End and John O’Groats to raise funds for Tesco’s National Charity Partnership with Diabetes UK and the BHF.

The walk will see thousands of Tesco colleagues from across the country join together to walk in relay between 5 September and 5 October, with the aim of adding to the £21 million already raised since the partnership began, and increasing awareness of these two leading health charities.