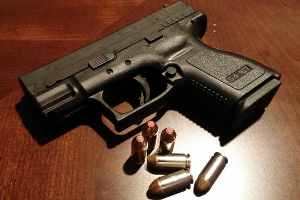 Greater Manchester Police have increased patrols in Burnage after gun shots were fired at a house in the early hours of this morning.

Two gun shots were fired at a house on Chorley Wood Avenue just after midnight and police recovered a number of spent cartridges from the scene.

Eyewitnesses have reported that a white hatchback type vehicle drove away from Chorley Wood Avenue around the time of the incident, towards Western Circle/Avon Road.

A 36-year-old man has been arrested on suspicion of possession of a firearm with intent to cause fear of violence. He remains in custody for police questioning.

Detective Inspector Mark Astbury of GMP’s City of Manchester Team, said: “Fortunately no-one was hurt and although we are in the early stages of our investigation, we believe this may have been a targeted attack.

“This happened at around midnight on a quiet residential street in South Manchester so I am sure that people will have noticed something out of the ordinary.

“Thank you to the people who have already come forward with their accounts but if you’re still to contact us, please don’t delay any further.

“The team of officers who are working on this case and the officers in the area will be more than happy to take information from you or listen to any concerns that you have so feel free to speak to them.

“I’m particularly interested in speaking to people who saw any white coloured vehicles in the area at the time. We are putting together the events leading up to the shooting and the events afterwards and would be grateful for your help in doing so.”

Anyone with information should contact police on 101 quoting reference number 6 of 24/09/17 or the independent charity Crimestoppers, anonymously, on 0800 555 111.

Shots fired at property in Rochdale

Brave Northenden shopkeeper fought off would-be armed robbers by spraying them with oil.