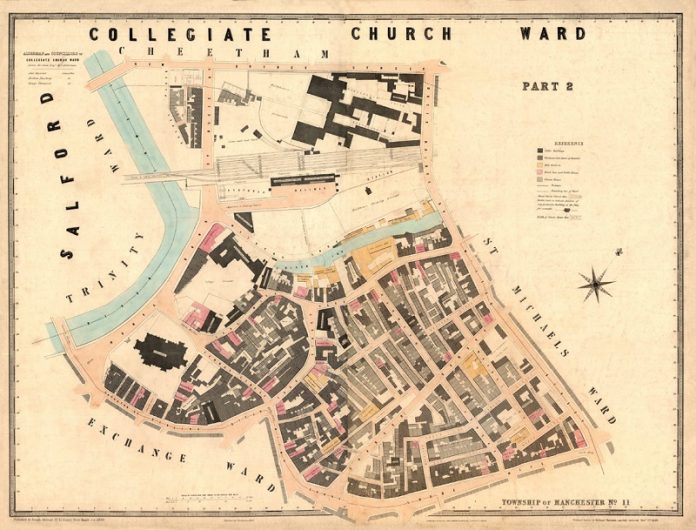 The astonishing transformation of Manchester as it grew from its thriving cotton trade in the late 18th century, experiencing periods of boom and bust through the Victorian period, to its post-industrial transformation in the 20th century has been mapped out in a new book by academics in Manchester.

Mapping the City, written by Manchester Metropolitan University historian Terry Wyke and geographers, Brian Robson and Martin Dodge, from the University of Manchester, unveils the forgotten maps of Manchester.

The book features more than 100 maps, land surveys, engineering surveys and bird’s eye views, many that have previously been unpublished, to reveal defining aspects of the city’s history in both its commercial and economic development as well as its cultural past.

The colourful maps tell the story of many of Manchester’s social problems such as housing disease and key political events, such as the Pererloo Massacre in 1819, and gives a new insight into the transport revolutions that have shaped the city from its pioneering canals and railways to the development of air transport.

Historian Terry Wyke, from Manchester Metropolitan, said: “This book is based on many years of research, map collecting and digging. As compelling and beautiful the maps are, their importance lies in the new light they throw on fundamental aspects of Manchester’s history. This book emphasises that its cartographic history is more than an illustrative attachment when explaining the history of the world’s first industrial city.

“Many of the images come from rarely consulted deeds and documents relating the activities of local government, landowners, businesses and pressure groups. Examples in the book include original 1750s deeds held in Chetham’s Library relating to land in the Shudehill area and a technical planning map from 1960 showing where parking meters were to be introduced in the city centre for the first time.”

One of the most prominent features of the book is the Adshead’s Twenty-Four Illustrated Maps of the Township of Manchester – one of the most detailed maps of Manchester ever created. The maps were published in 1851 at an incredible scale of 80 inches to the mile, providing an unprecedented record of the city’s streets, its public and commercial buildings as well as its shops and pubs.

Plans for iconic venues such as the football stadia, theatres and Coronation Street also feature in the book to provide another part to the history of Manchester.

Manchester – Mapping the City is published by Birlinn in a series which includes Edinburgh, Glasgow and Oxford.