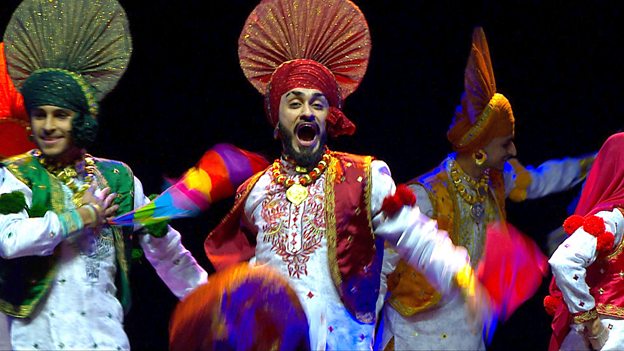 A new behind-the-scenes BBC documentary has revealed the pain, sweat and tears it takes to be a top Bhangra dancer.

Teams competing in the Bhangra Showdown, held this year in Birmingham, were filmed for three months as they tried to perfect their gruelling routines. Ajaypal Flora, from the University of Birmingham, is seen pushing his team to its limits during training sessions.

The competition is organised by the Punjabi Society at Imperial College, London, which claims it is the biggest of its kind in the world.

Originating from the northern states of Punjab in India, Bhangra is a traditional dance celebrating harvest time. The annual Bhangra competition is more than just silk and sequins to the young British dancers who take part. The University of Birmingham has won the competition four times, and this year are led by Ajaypal Flora.

The observational documentary sees their team battle against their local rivals Aston University to try to regain the title on home soil in Birmingham, where British Bhangra music was born.

Ajaypal Flora is the driving force behind the main team in the film. He choreographs the group’s routine, trains them and performs alongside them. He demands absolute commitment. In the programme he says: “After three months of training together – you know, hard, intense hours – you’re not really a team no more. You’re actually a family. Three months of training all comes down to seven and a half minutes on stage. It’s electrifying.”

The programme also explores why Bhangra means so much to the young dancers.

Ajaypal says: “I’m from Handsworth in Birmingham, and it’s a very multicultural place. You’re so used to seeing so many different ethnicities and when I came to university, although it was still in Birmingham, I had a culture shock. I was surrounded by white people – different music to what I was accustomed to and different kinds of lifestyles.

“Bhangra gave me the place of belonging like it was Handsworth all over again.”

Another dancer on the team, Manpreet Badh, tells the programme: “I just like the fact that I am Punjabi. I like the fact that there is something unique about being Punjabi, and Bhangra is probably the best way of celebrating that. For me it is just a very unique specific celebration of Punjabi culture.”

Inspired by TV talent shows and devised as a dance-off between rival universities, the competition is now a huge event, attracting thousands of fans to Britain’s biggest arenas. As the desi dance duel rolls into Birmingham, this is an up-close look at what it takes to be crowned champions.

Bhangra Or Bust – Our Lives airs on BBC One Wednesday 5 August at 7.30pm