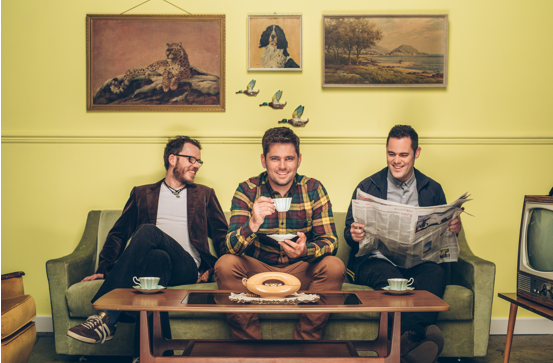 2017 is the year of Scouting For Girls.  Not only did this year officially mark a decade since the release of the band’s unstoppable million-selling eponymous self-titled debut album, it is also the year Scouting For Girls release a new album consisting often brand new unmistakable pop anthems set to have fans all over the world singing along in unison.  SFG made the announcement to excited fans this weekend during their main stage set at V Festival.

To celebrate all things Scouting, Sony Music will release ‘Ten Add Ten: The Very Best Of’ on October 27th and in addition to ten brand new hits in the making such as ‘Dancing In The Daylight’, ‘Butterflies’ and a Christmas song, the bumper package will also boast ten famous much loved Scouting For Girls hits of course including ‘She’s So Lovely’, Elvis Aint Dead’, ‘Heartbeat’, ‘I Wish I Was James Bond’ and UK #1 ‘This Ain’t A Love Song’.

SFG comments;  “We’ve been utterly blown away by the incredible reaction we’ve had to our tenth anniversary reissue and tour. And now we’re even more excited to release brand new music this year. These ten new songs were written and recorded over the last two years in an attempt to write the perfect Scouting for Girls single. We went back and listened to that debut album and tried to recreate some of that magic and deliver a worthy follow up ten years on. If you’re an SFG fan I hope you’ll love it especially as these ten brand new songs are packaged with ten of our favourite and biggest hits.”

Scouting For Girls burst onto the scene and signed to Epic on 14th February 2007.  A decision which saw them enjoy a triple platinum Number 1 debut album, multiple Top Ten singles and earned them a dedicated set of fans that still follow them avidly a decade later.  The occasion was marked earlier this year by a very special intimate Valentine’s Day gig at London’s Bush Hall to which over 20,000 loyal fans applied via a ballot to nab one of the 300 tickets available.

Throughout Scouting For Girls’ immensely successful career they’ve sold over 1.5 million albums, two million singles, had four Brit Award nominations, an Ivor Novello nomination, had four top ten singles, sold-out Wembley Arena and sold-out The Royal Albert Hall and had a series of hit singles all of which were inescapable radio smashes.  Ten years later, Scouting For Girls prove they are unstoppable.