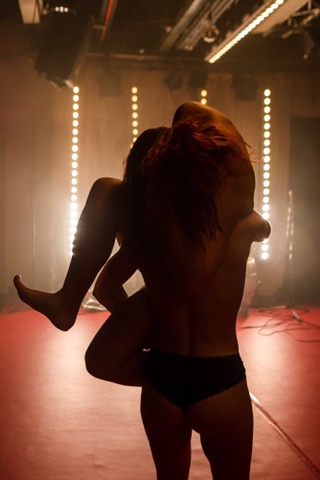 RashDash are bringing their smash hit Edinburgh production Two Man Show on tour and they are coming to Home next week.

The divisive and controversial new show which explores masculinity, won a prestigious Fringe First Award from the Scotsman, and was nominated for a Total Theatre Award, and won a Stage Award.

Two Man Show sees them playing two brothers having difficulty communicating as their father is dying.

Towards the end, the play deconstructs and turns into a blistering attack on language and theatrical formats for discussing masculinity, before turning to ideas of being a woman with traditionally masculine or traditionally feminine qualities, highlighting the problems of labels and a one-size fits all approach to treating women.

Abbi and Helen said, “This is an exciting time to be a woman. This is the beginning of the end of patriarchy. We’re alive and we want to be part of the change. This show is an invitation to men to be part of it too. If you’re not already. It’s an invitation to create a new language that will allow us to think new thoughts. It’s an invitation to create more space for the people we really are. The show is live music, movement and women playing men and it’s a mass of contradictions. Like the world. Expect to be moved and confused, provoked, tickled and alarmed.”

The play is being performed at HOme Manchester 11-13th October