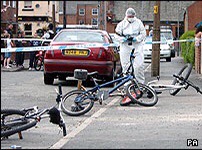 Police in Greater Manchester are appealing for girlfriends, sisters and mothers of those involved in firearms criminality to come forward as part of a new campaign to tackle gun crime.

‘Girls against guns’ urges those closest to offenders not to become an accessory to crime and tell police about anyone they know who is in possession of a gun or involved in gang-related activity.

The campaign is being supported by Pat Erdmann, the mother of Lee Erdmann who was gunned down in the Wellington pub on Regent Road, Ordsall on Saturday September 10, 2011. His killer has not yet been caught.

Gun crime has fallen by a quarter in Greater Manchester during the last year and police attribute this reduction to the work they’ve done with the community and partner organisations as part of Operation to Challenger to bring offenders to justice and raise awareness of firearm criminality.

Earlier this year officers used civil injunctions for the first time following a series of violent incidents in Salford. These injunctions prevent individuals from possessing dangerous items or behaving in an intimidating manner.

GMP also held a firearms surrender, which led to more than 220 weapons being handed in in Greater Manchester alone.

However, police do not want to lose momentum and the new campaign will see posters going up within the community and a dedicated phone number set up that people can call with information following on from a shooting.

Assistant Chief Constable Debbie Ford said: “We’ve come a long way in the last 10 years and have seen significant reductions in gun crime, which we couldn’t have done without the help of the community who, like us, want to see safer streets.

“However, one shooting is one too many and there is more work to be done to eradicate gun crime from our neighbourhoods.

“We’ve already seen innocent bystanders caught up in the crossfire of gang-related feuds and we will continue to work with people and partner organisations to stop these criminals causing fear and harm within our communities.

“If you know somebody who carries a gun, please do the right thing and tell us about it. By not saying anything to anyone, you’re not stopping it from being used and the last thing we want is to be knocking on your door to tell you that your loved one has been killed in a shooting.

“We understand how difficult it is to come forward but we are here to help and I want to reassure you that any information will be treated in the strictest of confidence.”

Greater Manchester Mayor and Police and Crime Commissioner Tony Lloyd: “Gun crime damages communities, cutting short young lives and leaving loved ones to pick up the pieces. We need to look within our communities to protect those at risk of gun crime and build safer communities across Greater Manchester. I urge those who know a loved one in possession of a gun to do the right thing and speak out. By coming forward, you can make our streets safer and ultimately, save lives.”

£325m contract to maintain our motorways awarded to Amey