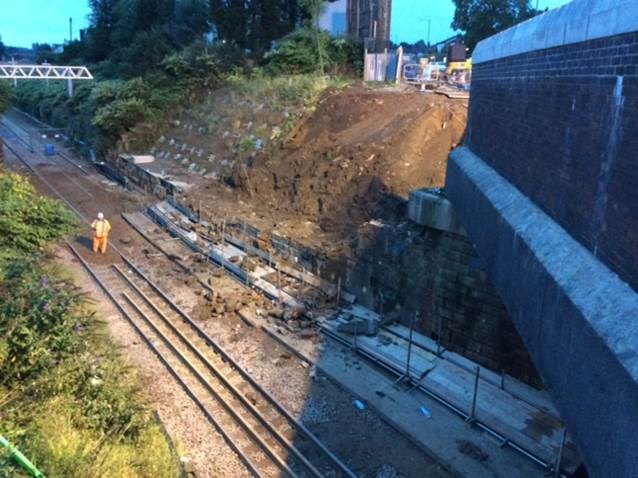 Emergency repairs to a bridge damaged by a burst water main will impact road and rail travel south of Bolton for several weeks.

A burst water pipe caused a section of Moses Gate bridge to collapse onto the railway below and created a hole in the road above on Thursday 17 August.

Major engineering work is needed to make the bridge and highway safe before both the road and railway can be reopened.

The work means the railway line between Bolton and Manchester will remain closed next week and it is anticipated a reduced train service will be in place for the following four weeks. The road could be closed for up to six weeks.

Andy Morgan, senior sponsor for Network Rail, said: “We are working round the clock to repair the damaged bridge and get train customers and road-users on the move as normal through this area.

“Repairing the water-damaged bridge is a complex engineering challenge requiring a bespoke design.

“We are working closely with Bolton Council, Transport for Greater Manchester and United Utilities to safely carry out the repairs so the railway line and the road can be reopened as quickly as possible.”

Rob Warnes, performance and planning director for Northern, comments: “We are working alongside Network Rail to keep our passengers on the move through Bolton, with a fleet of rail replacement buses. We advise all customers to check before they travel to make sure they have the most up to date information via the Northern website.”

The railway through the area has been closed because of upgrade work at Bolton station as part of the Great North Rail Project. The station and railway between Bolton and Manchester was due to open on Monday (28 August). Work at the station is still scheduled to be completed as planned.