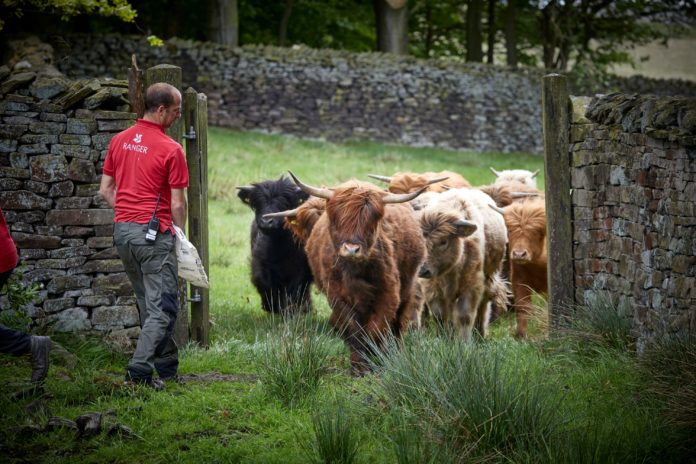 The sights and sounds of Scotland have come to North Cheshire this year, with the arrival of a dozen highland cattle at Lyme.

Part of the National Trust’s major long-term conservation project, these cattle will increase the diversity of grassland plants and wildlife across 1400 acres.

Importantly, the cattle will also graze dry grass in an effort to try to reduce the risk of fire, such as the one that broke out 5 weeks ago, destroying 15 hectares of moorland, home to several species of bird such as lapwing, curlew and skylarks and mammals including red deer and hares.

Chris Dunkerley, Lead Ranger at Lyme said: “Cattle have been grazed at Lyme seasonally in the past through agreements with local farmers, but this is the first time that these distinctive, docile animals will be living in the park year-round. Unlike other breeds, they are perfectly adapted to the harsh winter conditions of the moorland area, which they will be roaming in alongside Lyme’s famous historic herd of red deer.”

Lyme will be working with a local farmer to manage the herd or ‘fold’ as a group of highland cattle is known. This small herd was purchased using a generous gift made by a local family in memory of a loved one. Cattle numbers are hoped to increase over the next few years via further purchases and a breeding programme in the park. Donations to help care for the Lyme estate are always very welcome.

The areas that the cattle graze will maintain many of the park’s iconic open views, as well as creating areas for rare plants and ground nesting birds to thrive.The

Chris continued: ”These Highland cattle will graze happily on a wide range of vegetation and are one of the few breeds which can do well eating poor quality grass that has low nutritional value; like that found across the moorland here at Lyme.

“By grazing in relatively low numbers they will help to slowly improve the condition of our grasslands and increase biodiversity. During the winter months they will eat much of the dead grass which as we saw recently can become a serious fire hazard too. What comes out of the other end of the cows is also an amazing habitat in itself, dung will attract flies and beetles which in turn becomes food for birds and bats.”