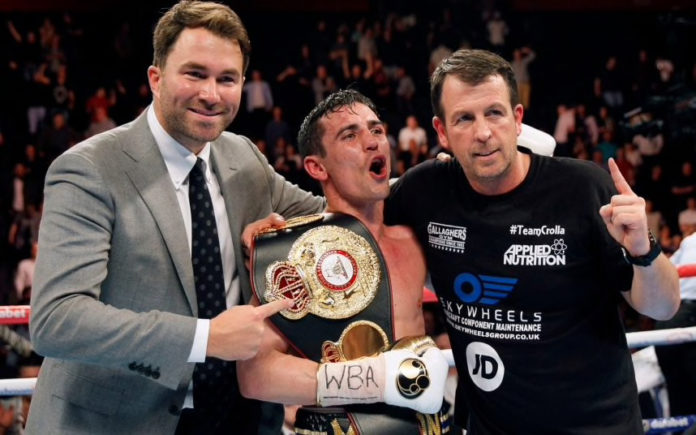 It could not be in a more fitting location! Anthony Crolla will fight at the Manchester Arena in his final fight as a professional boxer.

The beloved Mancunian lightweight will make the walk for the final time in an arena that has been tied closely to his 13-year career.

Debuting in the venue back in October of 2006 Crolla shared the card with fighters like Kell Brook, Enzo Maccarinelli and headliner on the card Joe Calzaghe. He worked his way to a points victory against Abdul Rashid.

He returned to the arena two years later. In his previous fight, Crolla had suffered his first professional defeat to Youssef Al Hamidi. ‘Million Dollar’ returned to winning ways inside the Manchester venue. This victory created the momentum to overturn the loss to Hamidi in his next bout.

Fast forward to 2013 and Crolla went on an impressive run at the famous venue. Stephen Foster, John Murray and Gamaliel Diaz all failed to beat Crolla in a 10 month period. This led the Manchester fighter to the WBO International Lightweight Title and on the verge of a World Title bout in January of 2015.

Crolla was attacked in December of 2014 when he confronted burglars at a neighbours house. For his heroic actions, he suffered a fractured skull after being hit over the head, with what was described at the time as, a concrete slab. Crolla was lucky to be alive.

The story does not end here. July of 2015 saw Crolla return and compete in his WBA World Title fight. The venue? Manchester Arena of course.

Just seven months after the injury Crolla would be taking on a highly rated Columbian in Darleys Perez who had only tasted defeat once in his 33 professional bouts. It was a tall task for the home fighter and the pair boxed to a draw.

The World Title contender spoke of the fight and his future after the fight, ‘I had to dig deep and do the crowd proud. I will only come back stronger.’

He fulfilled that promise. The fight was scheduled again for November and Crolla reached the pinnacle of the sport of boxing. After withstanding an early onslaught from the dangerous Columbian Crolla was able to land a perfectly placed body shot to finish Perez for the first time.

Crolla spoke to Sky Sports after the victory and said, ‘It’s been an absolute roller-coaster the last 12 months and this is the perfect finish. It’s a dream come true. I thought it would be a headshot [that ended the fight] but I’ll take that body shot any day of the week. I remember sinking the left in downstairs and, like most people who land a good body shot, I knew it was over there and then.”

Two more victories since then in his hometown venue over Ricky Burns and Daud Yordan saw Crolla’s record at the Manchester Arena become 9 wins, 2 draws and 2 losses.

Frank Urquiaga is the last man to face Crolla on Saturday and it is fitting that the bout will take place at the Manchester Arena. A place full of memories of both extremes for Anthony ‘Million Dollar’ Crolla in his superb and dramatic career, there is no better way for the former World Campion to sign off and hang up his gloves.