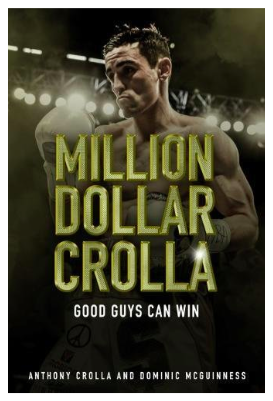 Anthony Crolla will be at Selfridges in the Trafford Centre this weekend offering his fans a chance to meet him. The boxing star will be celebrating the release of his book ‘Million Dollar Crolla: Good Guys Can Win’.

The book tells the tale of Crolla’s fascinating career. From being written off to becoming World Champion Crolla’s path has not been straightforward. Trauma of injuries both inflicted and received by Crolla in and out of the ring are included.

The book features insight into  fight with Kieran Farrell which resulted in Farrell being unable to box again after Crolla beat him in a unanimous decision. Shortly after the fight Farrell collapsed due to injuries inflicted in the ring.

Also included is the story of Crolla’s own injuries. They were sustained  when he attempted to intervene in a burglary at his neighbours house. The boxers good deed resulted in him receiving a concrete slab to the head. The altercation left Crolla in hospital with a fractured skull and broken ankle.

It is not all doom and gloom however. Stories of great nights in Manchester winning World Titles are also included in the book. It also covers Crolla’s latest success, his points win over Ricky Burns at the Manchester Arena.

The biography covers everything. Offering insight into family life, media
commitments and his passion for Manchester United, who he follows home and away.
Crucially, the book details the punishing training schedule, alongside his fellow champions at Gallagher’s Gym, which has helped him to the top.

Tickets for the event are £14.99 and include a copy of the book, saving attendees £4 off the recommended retail price and giving them the chance to meet the former World Champion.

If you wish to go tickets are available here.

Culture Cure: Late event at the Science and Industry Museum