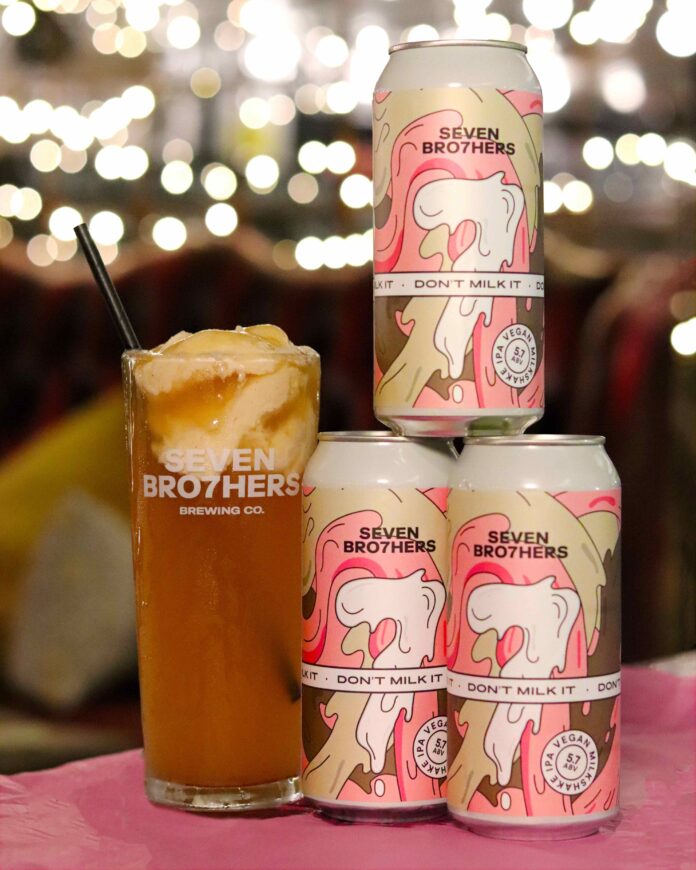 Get a shake on and try SEVEN BRO7HERS limited edition ‘Don’t Milk It IPA’.

The brand-new, limited edition, vegan milkshake IPA is full-bodied and sweet, with a touch of vanilla that gives the beer a pop of flavour reminiscent of milkshakes.

The Vegan Milkshake IPA is the fourth beer in the SEVEN BRO7HERS limited-edition series. It joins the Rye IPA, the Bubble House brut IPA and the brewery’s first gose beer ‘Salty Tiers’. The lockdown beers were crafted to lift people’s spirits through heavy restrictions in the run up to the holiday season.

“Following the popularity of our sweeter beers, such as the Marshmallow Stout, we are often asked for a vegan equivalent – something that offers a milky flavour without dairy. For anyone looking to take on Veganuary at the start of 2021, this could be the perfect pint.”

All beers are available for free same-day delivery for shoppers within a three-mile radius of the brewery. Orders must be over £20 to qualify and placed before 2pm.

However, the party can always continue at home, as the brothers have teamed up with their siblings SIS4ERS Distillery, and Salford Roasters, to sell beer, gin, hot chocolate and coffee hampers via its webshop.

“We have been overwhelmed by the response to our webshop this Christmas. Our Black Friday and Cyber Monday campaign hit 1000% more sales than last year, selling more than 40,000 of cans of beer over the discount weekend. We encourage people to continue to support independents, as it makes all the difference when businesses are facing into restrictions.”

The brewery was founded in 2014 by McAvoy brothers, Guy, Keith, Luke, Daniel, Nathan, Kit, and Greg, inspired by their dad’s home-brewing in their cellar at home.

Bakehouse and Boardroom are Hosting a Fantastic Cocktail-making Event