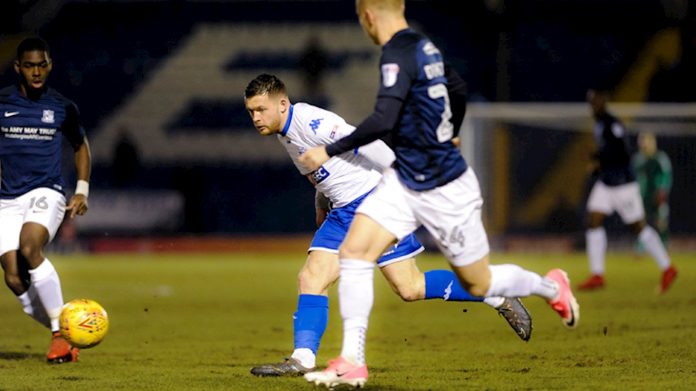 Two first half Blackpool goals condemned Wigan Athletic to only their second home defeat of the season at the DW Stadium.

Armand Gnanduillet broke the deadlock early on for the visitors as his scuffed shot crept past Brighton loanee Christian Walton in the Latics goal.

The advantage was extended before the interval when Kelvin Mellor reacted first to defensive hesitancy inside the six-yard box to fire home.

Anthony Gerrard’s first half header was the difference between the two sides as Oldham Athletic beat their relegation rivals MK Dons 1-0 to move out of the League One drop zone.

Latics took the lead five minutes before half time as Gerrard headed a Ben Pringle corner into the goal.

A goalless draw for Bury against Southend United was enough to extend their unbeaten run to five games.

There were chances at both ends in the game but there was nothing between the two teams in a tense match at the Energy Check Stadium at Gigg Lane.

Chris Lines’ stunning strike denied Rochdale the point their performance deserved in losing 3-2 to Bristol Rovers at the Memorial Stadium.

Ian Henderson gave Dale the lead in controversial circumstances, the officials taking an age to confirm the goal just short of the half hour mark.Liam Sercombe equalised shortly after the break, before Joe Partington put the home side ahead.

Henderson grabbed his second and an equaliser almost instantly, but Dale were undone by Lines’ spectacular effort 11 minutes from time.

Up one division, and Bolton Wanderers missed out on the chance to extend the gap between themselves and the Sky Bet Championship relegation zone after losing away at Cardiff City on Tuesday night.

With only one away victory to their names so far this season, the Whites were second-best against the promotion-hopefuls as first-half goals from Armand Traore and Sean Morrison sealed the points.

Weekend Football League round up

Switzerland and Spanish trips for Manchester’s clubs in the last 16 of the Champions...