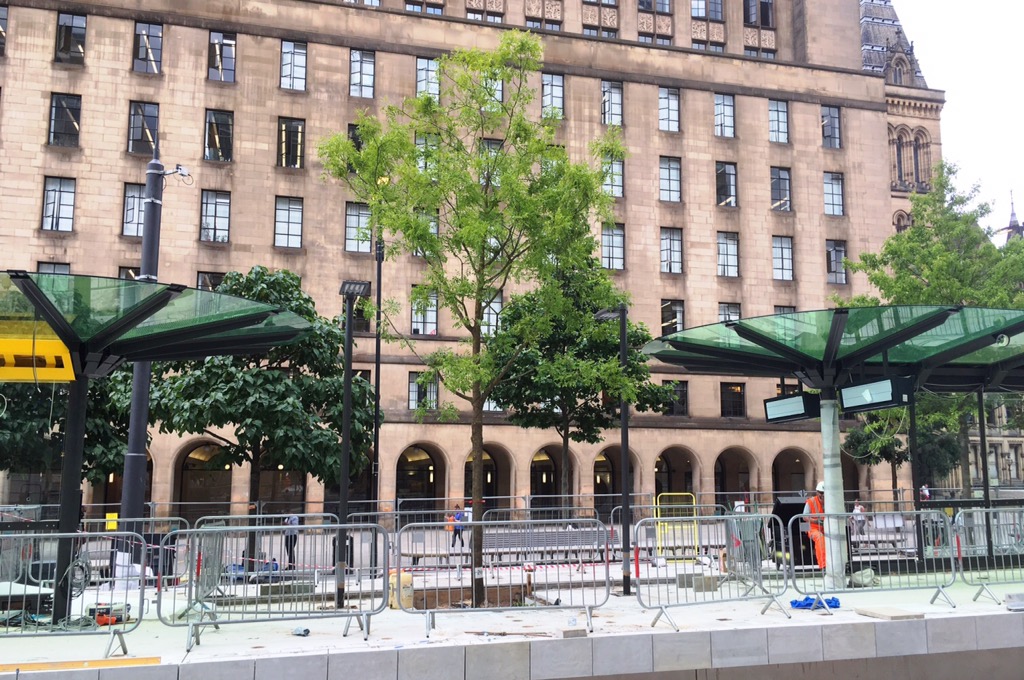 Metrolink services are on track to return to Manchester’s St Peter’s Square at the end of August, after a multi-million pound transformation of the popular city centre tram stop.
Transport for Greater Manchester (TfGM) is aiming to resume services through the square during the Bank Holiday weekend, subject to the successful completion of a thorough testing and commissioning process once construction work is complete.

At the same time, a full Eccles line service will be restored following extensive track replacement work to ensure the continued safe and reliable running of trams along the route for many years to come.

The St Peter’s Square stop opening will be good news for customers on the East Didsbury line, who will benefit from a more frequent, six minute daytime service (0715–1930 Mon-Fri only and Sat 0930–1830). The Altrincham – Bury service pattern will also be restored.

The following services are planned to run from the end of August:

Peter Cushing, TfGM’s Metrolink Director, said: “We know there’s a great deal of interest from our customers in what services will look like when the new St Peter’s Square stop opens so I’m pleased to confirm the new service patterns now.

“We’ll start to see the benefits of the new stop even before the Second City Crossing opens, with more frequent services able to run to and from East Didsbury.

“There’s a lot to achieve in the coming week as our contractor prepares to hand over the stop for us to run test trams. We then hope to welcome our first passengers back to the vastly improved St Peter’s Square stop over the Bank Holiday weekend.

“I’d encourage customers to keep an eye out for the latest information at our website, on social media and on stops and trams before the Bank Holiday weekend.”

Metrolink services have been suspended through St Peter’s Square since 26 June to accommodate works to get it ready for services at the end of August.
The newly expanded stop has two platforms and services will initially run through the stop using the revamped original city crossing line which continues along Mosley Street.

Metrolink contractor M-Pact Thales (MPT) is continuing work on sections of the Second City Crossing. When the new line opens in 2017, the bigger, improved stop will allow more frequent services to run through the city and across the tram network.

The St Peter’s Square stop is part of Manchester City Council’s flagship redevelopment of the square into a major new civic space.

More than 20 new semi mature trees are being installed around the stop, which is the first on the tram network to have trees planted on its platforms.

Both platforms have two trees to offer shade and greenery alongside the specially designed green themed passenger shelters.

Yorkstone paving is currently being laid on and around the tram stop and square to complement the existing paving following major works by the council in 2014.

Some of these paving works will continue in the area after the tram stop opens for services at the end of August, to finally complete the whole of the St Peter’s Square area.