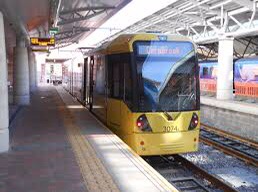 Terminals Two and Three at Manchester Airport could be linked to Metrolink after the government announced the details of its transport investment following last week’s Autumn Statement.

The Department for Transport has awarded £2.1m to the project “to further the business case” for it.

A spokesman said the extension would aim to “improve passenger journeys to the soon-to-be expanded Terminal 2”.
The government has also announced that it is “committing to develop improvements identified by the Manchester M60 North-West Quadrant”.

The announcements form part of  transport investment worth £3 billion, the major part being the  start of the £1.5 billion A14 upgrade, a new 21-mile road between Huntingdon and Cambridge.

In this part of the country, the A6144 to Liverpool and M66 to Accrington will continue to be developed while the government will continue to examine the case for improving connectivity between Manchester and Sheffield.

A new orbital road outside of the existing M60, linking the M62 west of junction 12, the M61 and the M62 east of junction 18. The corridor could be further extended to the south to join the M56 at its junction with the A556, providing half of a new orbital motorway around Greater Manchester as well as a new strategic link from the M6 in Cheshire to Yorkshire.

This could also allow one or more lanes on the existing M60 to be reassigned as bus and/or high occupancy vehicle lanes.

While a programme of improvements to significantly enhance the capacity, performance and resilience of the M60.

These would include widening of the existing motorway, junction improvements and the creation of ‘through lanes’ to separate local and long-distance traffic.

David Brown, Chief Executive of Transport for the North, said “Research shows improving transport across the North is key to transforming the region’s economy – particularly between east and west. The improvements announced today are a good first step in building the transport links needed to transform the North.”

David Brown said: “In the Autumn Statement, and through the Northern Transport Strategy published alongside it, the Government has made it very clear that we need to boost productivity to grow the UK’s economy. We know the North’s economy is hindered by poor transport links, and we know this makes it harder for people and goods to move around our region. These reports highlight three areas where improvements to our road infrastructure can be made to help boost economic growth.”

Improvements across the board at Pennine Acute Hospitals Inspectors find