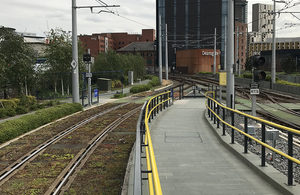 A report on a tram near miss on Deansgate Castlefield tram stop last May has criticised the tram operator and Transport for Greater Manchester.

The incident happened on the 17th May last year in the evening when a tram passed through the centre platform of Deansgate-Castlefield stop without making its scheduled stop.

The tram exited the platform at around 9 mph and then passed a stop signal. This placed it in the path of a second tram, which was approaching a junction as part of a signalled movement. The driver of the second tram saw the first tram approaching and was able to stop in time to avoid a collision.

The incident occurred because the driver of the first tram did not stop at the platform or stop signal, due to a temporary loss of awareness.

While some doubt remains as to the reason for this loss of awareness, investigations consider that it was either the result of a medical event or the driver losing focus on the driving task.

RAIB found that the driver had been involved in previous similar incidents but that the tramway operator, Keolis Amey Metrolink, had not adequately addressed his safety performance.

RAIB also found that the driver’s safety device on the tram did not detect or mitigate the driver’s loss of awareness because it was not designed to do so.

The hazard of a driver losing awareness while operating a tram was not recognised by Thales when it risk assessed the new layout at the tram stop or by Transport for Greater Manchester when it approved the new layout for service.

Keolis Amey Metrolink also did not recognise this hazard during its risk assessment of the new layout, although it did identify the hazard as part of a general risk assessment of tram driving tasks. Despite this, the associated risks were not effectively controlled.