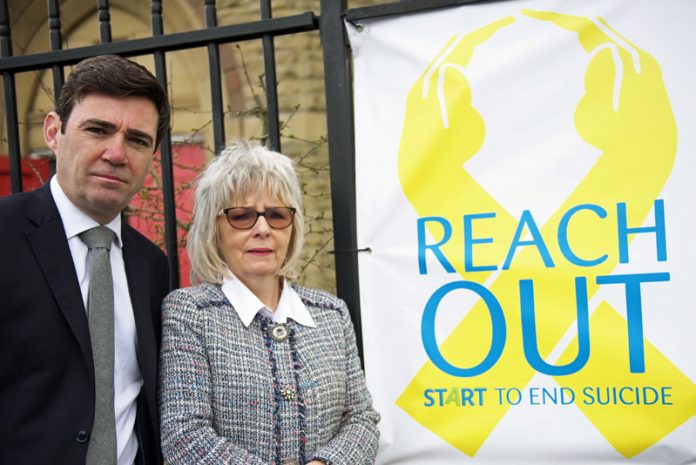 Greater Manchester Mayor, Salford City Council, Salford CCG and the Big Lottery Fund have united in backing ‘Reach Out; Start to End Suicide’ campaign to fight lives being lost to suicide as it was launched at Salford Civic Centre.

START’s, a charity using art and creative activities to help people recover from mental ill health, ‘Reach Out ; Start to End Suicide’ campaign aims to raise awareness of suicide and the important role communities can play in helping to prevent it.

The year-long campaign launched with a community art installation at Salford Civic Centre which is funded by the Big Lottery Fund. ‘Sea of Hands of Support’ is made up of pledges from members of the community, each written on hand cut-outs that together form the outdoor installation. It will be a powerful representation of the support that is out there and will offer messages of encouragement and hope to those who are in need.

The launch saw Salford City Councillors uniting in making pledges from the council chamber to ‘Sea of Hands of Support’. The Council then observed a minutes silence as a mark of respect to all those who have lost their lives to suicide as part of the launch and Mental Health Awareness Week on Wednesday 16th May.

Tragically one person dies every 90 minutes as a result of suicide in the UK[1] and it is estimated that each death directly affects at least 10 people; and potentially impacts as many as 120 others. In the last five years, 109 people were lost to suicide in Salford[2], and the wider impact of this is felt across the community.

Bernadette Conlon, Chief Executive and founder of START, said: “Suicide affects so many people and the real tragedy is that most of these deaths were preventable. Evidence tells us that stigmatising attitudes result in people being less likely to get help or to give it. That is why START is asking the whole community to get behind us and reach out so that we can start to end suicide. This small action can, and will save lives.”

Dennis Baldwin, Campaign Lead at START and a survivor of multiple suicide attempts said: “Suffering from anxiety and depression had me believing I was worthless and didn’t warrant saving. I was in an extremely dark place, and found myself helpless and alone. I felt that my only option to stop it all was to kill myself.”

“I was lucky; I survived and have now moved on from surviving my mental illness to being able to live with it. This came through rebuilding a support structure around myself. That is what ‘Sea of Hands of Support’ is all about; a mass display of support from the community around us for those who are in need of it. I know that I would have cherished it when I felt so isolated and alone.”

Andy Burnham, Mayor of Greater Manchester, said: “Sea of Hands of Support will deliver a powerful and important message to people at risk of suicide, that they can seek support from families, friends, colleagues and organisations doing valuable work to help vulnerable people. I have witnessed first-hand the vital work START delivers on a daily basis, and it is so important we challenge the ongoing stigma surrounding mental health.

Paul Dennett, Salford City Mayor said: “Salford City Council is absolutely committed to raising awareness of suicide and providing effective interventions with our partners to prevent loss of life. We used our full council meeting to tackle stigma and promote that it is ok and right to talk about out mental wellbeing. Support is out there for people who need it and they should not be embarrassed or afraid to ask for it.”

James Harcourt, England Grant-Making Director at the Big Lottery Fund, said: “This art installation is a great example of the vital support that communities can offer when it is needed most. We’re proud to be backing a project that has used personal experience to bring people together and make a difference to the lives of others.”