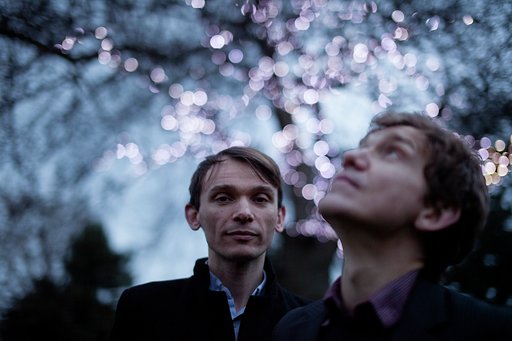 The live performances will take place at IWM North in January to bring audiences a night of sound, song and animation set against the dramatic backdrop of galleries representing over a century of human conflict.

Taking influence from a rare document in IWM’s extensive collections, a graphic record which proclaims “THE END OF THE WAR” and captures the moment the guns fell silent, Field Music will explore the energy, hope and fragility brought about by the end of the First World War.

he duo, comprising Sunderland-based brothers Peter and David Brewis, boast several critically acclaimed albums including Commontime (2016) and Plumb (2012) and a reputation for innovative and varied live performances. Since forming in 2004, they have become known for a deconstructionist approach to music and songs, carving a niche in their approach to albums, soundtracks and collaborations. In 2016 they helped commemorate the Battle of the Somme by writing the soundtrack to 14-18 NOW’s commissioned film Asunder.

David Brewis, Field Music, says: “As soon as we saw the graphic record, the possibilities for this project spread out in front of us – a tiny, incomplete fragment, not much more than a moment, but one which could be both the beginning and the ending of a huge story. We’ve always written about uncertainty and this moment was about as uncertain as one could imagine. This is a situation where it would be impossible to tell anything like ‘the whole story’, but I hope we can create something worthy of such an awe-inspiring starting point. That we’ll be making this music to be performed in two such imposing and evocative spaces makes it all the more exciting.”

Susie Thornberry, Assistant Director of Public Engagement and Learning at IWM, says: “We were looking for musicians to respond to what happened when the guns stopped and the new world – a world of jazz, freedom and new ideas – emerged. The live performances are looking to do much more than present an object from IWM’s collections. We want to immerse IWM’s 21st-century visitors in what the first moments of this new world felt like and to make connections with today. Field Music’s critically acclaimed live performances, reputation for deconstructing sounds and cutting edge approach to storytelling meant they were the perfect artist for IWM to collaborate with in delivering these unique performances.”

Field Music’s performances will respond to what happened when the guns stopped and a new world of uncertainty and ideas emerged. Audiences to this once in a lifetime event can expect surprises, crescendos and moments of anti-silence in the galleries of IWM North and IWM London. The events form part of IWM’s Making a New World season of exhibitions, installations and immersive experiences taking place at IWM London and IWM North, exploring themes of remembrance and how the First World War has shaped today’s society.

Tickets to performances at IWM North and IWM London can be booked via iwm.org.uk