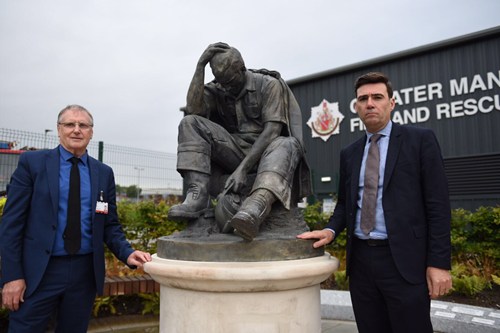 GMFRS Area Manager, Paul Etches welcomed guests to the unveiling and explained the journey behind the creation of the memorial.

Major Nigel Tansley MBE, Lead Chaplain for GMFRS and Mayor of Greater Manchester, Andy Burnham addressed those gathered at the site, highlighting the importance of having a permanent reminder for all fallen firefighters.

Andy Burnham said: “This is an occasion that I feel a great honour in attending as your first elected mayor. The memorial is a permanent fitting to those who have lost their lives in the line of duty.

“I speak on behalf of Greater Manchester in paying tribute to all fallen firefighters and I hope this memorial is a fitting way to remember those who gave everything to service the communities they loved.”

A minute’s silence was held to remember those who sacrificed their lives for others.

Councillor David Acton, Chair of the Fire Committee closed the ceremony and said: “I would like to pay tribute to all firefighters for what they do. They keep the people of Greater Manchester safe, and for that I thank them.”

The artwork has been created by London-based sculptor Douglas Jennings and stands at the front of the training site.

Words suggested by GMFRS staff ‘That Others May Live’ has been inscribed onto the plinth. Plaques with the names of fallen firefighters in Greater Manchester have been added to the memorial.