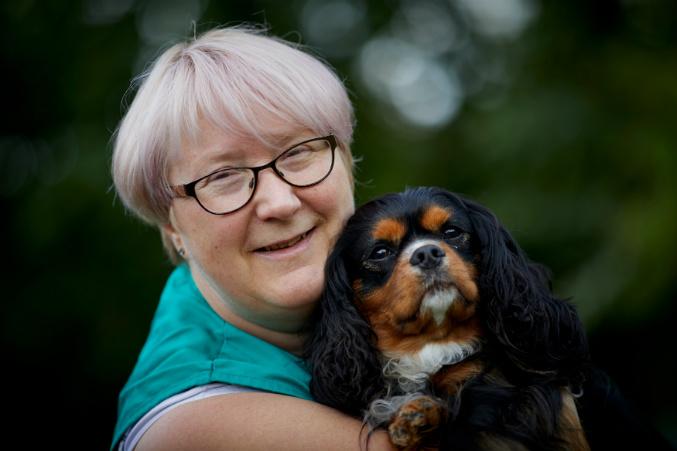 Dog lovers are being encouraged to help the lonely and depressed in their community by sharing some ‘animal magic’ at a pop-up cafe in Manchester.

Animal assisted therapy, which began treating hospital patients with schizophrenia and and bipolar disorder, is now being used at the pop-up cafe for isolated members of the community where people with pets can bring their dogs in to help those struggling with mental health issues over a cup of tea.

Paints and Paws Pop Inn is the brainchild of Sharon Hall, 54, and found buying a puppy helped her cope with the loss of her own parents.

It uses the “real comfort” and relaxation a dog brings by holding or cuddling a beloved pet giving the “small ray of light” for enjoying other things in life too, Sharon said.

The former psychiatric nurse uses animal assisted therapy on patients who begin to bond with the animals, reconnect with living things and draw people out of themselves to open up about problems and worries.

Sessions also includes two rescue rabbits, Sid and Nancy, as well as rats, snails, dogs and hamsters and art classes making toys for pets. There’s even singing from Sharon’s son, who styles himself on Sammy Davis Junior – with a real ‘rat pack’.

The cafe is an extension of successful work Sharon already does as part of her pet and art therapy service, Noah’s ART, which has used animal rescue therapy at North Manchester General Hospital.

“That’s the beauty of this work,” she said.

“The connection you get with an animal depends on you. And then that connection builds a bridge to start interacting with things and people around you.

“It’s a great way for people to do their bit for their community too if they bring their own dogs,” says Sharon.

“They get the satisfaction of knowing they have ‘shared’ their pet with someone who appreciates it, and in turn that has benefits for all involved.

“Animals, community, art all brought together in a safe space, where you can bring your dog and enjoy a brew and a bit of homemade cake. What could be better?”

Noah’s ART is one of 35 projects funded by £330,000 in grants from Manchester Health and Care Commissioning (MHCC) to target people who may find it difficult to get help or needed support for mental wellbeing. Project like this are also representative of the city’s wider plans to focus on more support in the community through its recently launched Local Care Organisation.

Vicky Lea, who is a reablement team leader at Manchester City Council, visited the Pop Inn session with her own dog, 11-year-old Shih Tzu, Chunkus.

She said: “Sessions like this really help people with their confidence and making friends again, which has a major impact on self-esteem.

“It just shows you how powerful social care and community support can be – which is a big priority for Manchester.”