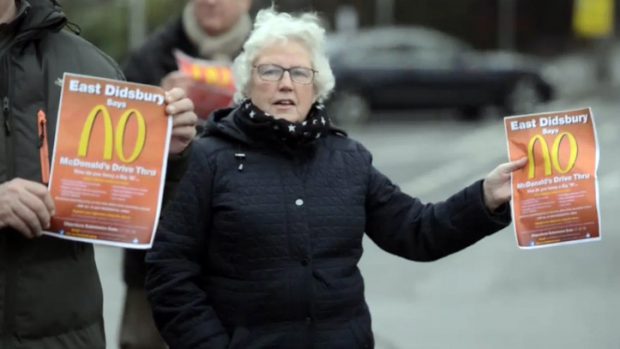 Plans for a new McDonald’s in Didsbury have fallen through after a campaign backed by prominent politicians, traders, a nearby high school and local residents attracted more than 1,000 signatures.

McDonald’s caused outrage when bosses submitted an application to open one of their outlets at a busy junction across the road from Parrs Wood entertainment complex and Parrs Wood High School.

Speaking at one of the protests community campaigner, John Cameron said:

“The presence of McDonald’s would only add pressure at an already difficult time for local businesses. We need to do all we can to make sure Manchester doesn’t become completely dominated by global brands.”

The council was set to reject proposals after the community campaign gathered momentum, but McDonald’s have now withdrawn their application.

Among those objecting and attending the protests was former McDonald’s employee and Manchester’s Opposition Leader, John Leech who said:

“Manchester remains a desirable place to live and work because of its thriving independent business offering unique places to eat, drink and shop.

“The impact of another enormous chain could have been fatal, so this really is a huge win for our local businesses.”

The McDonald’s proposals were met with fury by residents due to concerns over childhood obesity, the proximity to local schools and worries about traffic and anti-social behaviour.